From Path of Exile Wiki
Jump to: navigation, search
Cold SnapSpell, AoE, Cold, Duration
Radius: 16
Mana Cost: (11-28)
Can Store 1 Use(s)
Cooldown Time: 3.00 sec
Cast Time: 0.85 sec
Critical Strike Chance: 6.00%
Effectiveness of Added Damage: 140%Requires Level 16Creates a sudden burst of cold in a targeted area, damaging enemies. This also creates an expanding area which is filled with chilled ground, and deals cold damage over time to enemies. Enemies that die while in the area have a chance to grant Frenzy Charges. The cooldown can be bypassed by expending a Frenzy Charge.Per 1% Quality:
0.5% increased Area of EffectDeals (32-666) to (47-999) Cold Damage
Base duration is 5 seconds
Deals (26.3-1193.2) Base Cold Damage per second
25% chance to gain a Frenzy Charge when an Enemy Dies while in this Skill's Area
Modifiers to Spell Damage apply to this Skill's Damage Over Time effect
(0-19)% increased Effect of ChillPlace into an item socket of the right colour to gain this skill. Right click to remove from a socket. 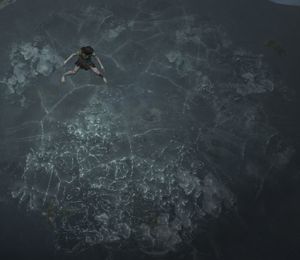 Delve monster Unstable Weta use its own version of Cold Snap as a cast on death skill. It use the same graphic icon as chilled ailment and Chilled ground, and also deal cold damage over time.