From Path of Exile Wiki
Jump to: navigation, search
Lord of the Coin 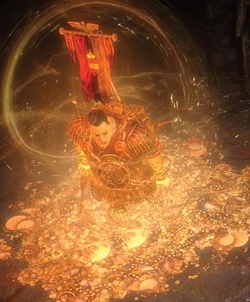 Functions: Offers items in exchange for

For a list of items offered by Cadiro, see Cadiro's Offer.

Cadiro Perandus was an NPC that appeared exclusively in the Perandus league. Occasionally he spawned in a zone, offering an item in exchange for some

Cadiro Perandus can be encountered via Zana's Map Device with the Perandus league modifier (if available) at a 33% chance. Using one of the Perandus Scarabs alongside a map will give a 33%, 66% or 100% chance for Cadiro to spawn. He also has a chance to spawn in the Immortal Syndicate safehouse if Janus Perandus was stationed there. He is guaranteed to spawn in

Cadiro Perandus was a master of coin, the minister of finance in the kingdom both before and after his family's ascension. His greed was legendary, for he was a devotee of Prospero, the ancient Azmerian god of the underworld, the earth, and all its boundless treasures. He also aided his nephew Chitus immeasurably on his ascension to the throne.

Following the death of Chitus by the hands of Voll's forces in the Purity Rebellion, Cadiro sent out a steady stream of unremarkable carts and wagons flowed from the capital, bearing a secret cargo to the far reaches of Wraeclast. By the time House Perandus fell, Cadiro had managed to steal the entirety of the kingdom's treasury.

Though centuries had passed since then, Cadiro remains, forever sustained by his devotion to Prospero. He wanders the countryside in search of his lost caches, eager to reclaim them and their riches.

Cadiro is also mentioned in the following flavour texts:

First SnowFirst Snow
Cobalt JewelLimited to: 2
Radius: Medium (1200)(7-10)% increased Projectile Damage
With at least 40 Intelligence in Radius, Freezing Pulse fires 2 additional Projectiles
With at least 40 Intelligence in Radius, 25% increased Freezing Pulse Damage if
you've Shattered an Enemy RecentlyCadiro watched young Chitus play in the frostbitten grass, care-free, happy,
and unburdened by the responsibility the Perandus scion would soon endure.Place into an allocated Jewel Socket on the Passive Skill Tree. Right click to remove from the Socket.

Polished Perandus ScarabPolished Perandus ScarabArea contains 3 additional Perandus Chests
Area has a 66% chance to contain Cadiro PerandusBy planning against the theft and plundering of artefacts by your family's patron, Cadiro,
you have shown your intellect, Icius. The Order of the Djinn puts its faith in you.Can be used in the Templar Laboratory or a personal Map Device.

Now you have the look of a connoisseur, an educated appreciator of all things exquisite and dangerous.

And I, Cadiro, am one who provides such delights. Once a lord of influence and opulence, I am now but a humble peddler seeking to recover his lost fortunes. Gold coins of Perandus mintage, secreted away in gilded chests so as to escape the grasping digits of that puritanical usurper, Voll of Thebrus. Perhaps you have seen such chests on you travels?

If so, I could offer you antiquities of remarkable potency, paraphernalia of pernicious craftsmanship. All I would ask in return is the conveyance of the contents of said chests to my person.

As fortune would have it, I have such a wonder in stock even now. A relic of such formidable agency that I shudder to think what it could do in the hands of one predisposed to use it.

For a little coin, those hands could be yours.

Yes, you are quite right to query my curious penchant for obsolete currency.

Once there was a time when my personal symphony was composed, quite completely, of the delightful tinklings of coinage. Nowadays, I'm dancing to someone else's tune.

I have a backer, you see, who generously supports my ongoing liquidity. Naturally, he expects a good return on his investment, and it transpires that only coinage of the golden variety will satiate that expectation.

Chitus was shaping up to be the greatest leader since Veruso. My nephew's gemling thaumatocracy would have made the Empire truly eternal, would have raised mankind up from the fragile muck of flesh and blood. And the wealth... oh the riches that could have flowed through the Empire's capitalist capillaries.

Then that idiot of a High Templar had to come along and ruin it all. Him and his 'God of Purity' and his army of fanatics and barbarians. A veritable horde of ignorance.

If Chitus had lived, the Empire would have lived, and oh what a wondrous and eternal life it would have had!

The same day that Veruso planted his banner in the soil of Sarn, the Perandus family built the first market stall. That one stall spawned so many others that the people came to call our venture Perandus Markets.

We were never vain enough to make the name official. Until Chitus took the throne, we were a most unassuming consortium.

Yes, we did occasionally employ the Silent Brotherhood to remove the more stubborn obstacles to our commercial endeavours, but for the most part we tended to solve our issues with coin and contract rather than bow and blade.

In hindsight, we should have taken the reigns of power much earlier. If we had done so then perhaps I could now be speaking of Perandus in the plural rather than the singular.

When you're a fat purse such as I, you are wise to insure yourself against being slit and emptied. In the face of Voll's ridiculous crusade to Highgate, I thought it only prudent to bolster my insurance policies.

It was in our household god, Prospero, that I found my ideal underwriter. While my relations paid tithe and lip service to Prospero the symbol, Prospero the myth, I chose to dig a little deeper than that.

To my delight, it transpired that our god was not only real, but of a similar opinion regarding the near, uncertain future of the Empire.

We signed a contract, Prospero and I, and more than two centuries have borne witness to our successful partnership.

The best deal I ever made.

The god of lost souls and found treasures. Lord of the underworld and all its material bounty. Gems, precious metals, coal... a myriad of subterranean substances, exotic and volatile. If it has value and it can be unearthed with pick and shovel, it falls within Prospero's divine concerns. As do all those who trade in them.

Prospero was a god of our ancestors, the Azmerians. As we Eternals descended from those mountains, our gods descended with us.

To the mundane mind they are myths, nothing but stories. to those with a little more imagination, they can be so much more.

So you've polished off Izaro's 'Lord's Labyrinth' have you? Proved that you have the mettle for imperial leadership.

Sadly, the empire isn't what it used to be, but you're more than welcome to know it back into shape for us.

Despite my personal feelings surrounding Izaro Phrecius, he did provide we Perandus folk with an unprecedented opportunity.

Over the centuries, the Phrecius family had blocked our every attempt to gain the throne on the scandalous basis that our blood was not of imperial quality

So when Izaro called that whole blood fiasco into question with his Lord's Labyrinth, it gave us the only clear shot we would ever have at sovereignty.

Without Izaro, the Perandus name may never have come to be associated with the throne. So in a somewhat qualified fashion, he has my gratitude.

This is a non-exhaustive list of the items Cadiro Perandus can offer players as he is encountered throughout Wraeclast. Items are priced in

. Each offer can be accepted only once and Cadiro will leave via a portal once the transaction is complete. If the offer is declined Cadiro will remain in the area, giving the player the opportunity to fetch the required coins in their stash if they are not carried in the inventory. Cadiro can offer league-specific unique items which aren't easily obtainable.