From Path of Exile Wiki
Jump to: navigation, search
This page is about the monster Zombie. For the skill gem, see Raise Zombie. 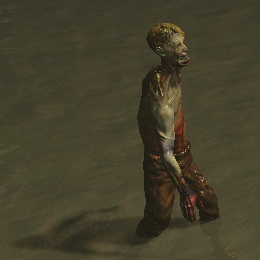 It's dusk on the moors. The air is still and hot. Quiet, but for the soft hum of the cicadas in the treetops. The rhythmic sound nearly lulls you to sleep, but suddenly something catches your attention. A shape is moving slowly towards you through the gloom, rustling the leaves. Growling.

Do not underestimate the bloated, rotted corpses that wander the swamps and bogs of Wraeclast's shoreline. They may lack agility, but the dark corruption animating them imbues them with tremendous strength and ferocity. The island's Zombies are always hungry, and they will pursue the scent of blood relentlessly. Wraeclast's yawning graveyards have spawned a legion of these shambling undead, and they are a blight on the population. Many who fall before them are soon found alongside their putrid ranks, the undead army forever growing.

The Zombie's primary strength is its toughness. All that dried sinew, meat and bone is tough to hack through. They can take a lot of punishment. The easiest way to defeat a Zombie is to exploit its lack of speed, but woe be unto him who finds himself cornered. Zombies hit hard with their desiccated, gnarled hands, but their bite is the most dangerous thing of all. Once bitten, a victim will find their very skin rotting away, and they will surely perish without prompt healing attention.