In Izaro's grotesque little garden, you'll find an old friend of mine.

The yawning maw that is Yugul... but a self portrait of what that pathetic creature has come to believe about the nature of fear. Those who look upon him see their own fears reflected in his horrifying visage.

Yugul, Reflection of Terror is a unique monster and a minor god located in The High Gardens in Act 8.

You will travel to The High Gardens which has no waypoint via The Bath House. Near the end of the gardens you will find The Pools of Terror wherein Yugul resides.

Upon defeating Yugul, Hargan will give you 1 Passive Skill Point. You will also gain The Pantheon power Soul of Yugul.

Vaal scholars seemed compelled to answer all manner of strange and troubling questions. Yugul was one such scholar. Whilst plumbing the depths of humanity, he came to believe that there was no truer expression of humanity than pure terror.

He would induce terror in children and then capture their reactions within eldritch mirrors, devices of his own creation that could petrify fear for extended study.

Through his gallery of reflected terror, Yugul came to understand human nature so well that he was able to manipulate his way into the Vaal halls of leadership, and eventually grew so feared and renowned that he ascended into godhood. 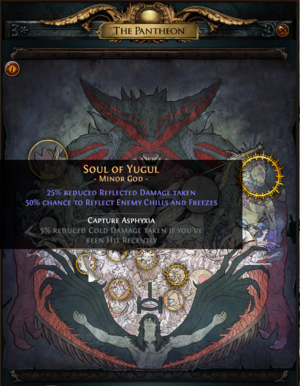