From Path of Exile Wiki
Jump to: navigation, search
Keeper of the Spirit 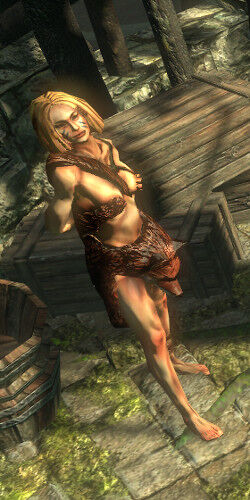 Yeena is an NPC that can be found in The Forest Encampment in Act 2 and in The Bridge encampment in Act 7. She functions as a vendor of magic/caster items as well as flasks, and has a significant role in several quests.

She is a very kind-hearted and somewhat eccentric person, appearing even slightly child-like in her personality. She firmly believes that she can communicate with nature and "the spirits", to which some residents of the Encampment react with scepticism or amusement, but it turns out that at least sometimes, her visions are not out of touch with reality.

Yeena is a wild soul in touch with nature. She seems to be able to foresee things and offers a unique perspective on the world to the exiles who pass through the Encampment. She appears to be very compassionate and willingly helps anyone in need - for example, she takes care of Helena when she appears in the Encampment, even though it is not initially certain whether she can be trusted.

Silk appreciates Yeena's unusual character and that she focuses on the more spiritual side of life, rather than only on the mundane, physical reality. Some others are more sceptical, however - Greust seems convinced there is no truth to her visions and that thinking she talks to the spirits, "she talks to herself", whereas Eramir also appears quite sceptical and worried she may be meddling with powers she should avoid. In the end he does admit, however, that her more vivid visions often prove true and can be very helpful (as is the case in the final quest, Shadow of the Vaal).

Yeena is saddened by the loss of her friends to the wilds. She is apparently aware of Sin's presence around the exile and decides to accept him. Yeena appears to have gained the power to transform herself into the form of a fiery animal at will.

I am Yeena, Keeper of the Spirit. Are you a kind exile, like Eramir? He is good to us… helps us. You will stay and help us too, yes?

Eramir was a wise man in Oriath. He is our wise man now. Hear him. You will learn much. If you do not hear, you will likely die.

Greust does what he thinks is right. And, in Greust’s dream, he is never wrong.

Silk knows more than others think. He watches, he learns. Look between the words and you will see the truth in Silk’s stories.

Helena is healing, I make sure of that. But you want to know if you can trust her? I see her spirit. It was born good and needs work to keep it that way. Much like yours.

The forest children are ill. Once they drank from fruit, ate nuts and berries. Now they drink blood, eat brain and heart. This land is in a nightmare from which it cannot wake.

Viper eats monkey. Monkey eats viper. The forest is hurt, confused. It fights with itself. There is no peace for us in this war.

If Silk’s story of the mother of Eight-Legs is true, then you should go get the spear from her. The creatures near the Chamber of Sins have suffered from a twisting of their spirits. They are sick and angry. If this happens to the Eight-Legs, we will all suffer from their fever.

Lorrata is dead. It is not news to me. The forest screams its grief.

You need not carry the blame; this was Lorrata’s will. I do not question why she allowed you to end her days. I keep her in my dreams, where she might still help us.

You arrive! The great Spirit spoke in my dreams, told me that darkness would again drown our lands. And you, exile, would walk before the flood.

But what is this? You are not alone. A shade a memory, older even than...no...older than Spirit? Fear grips my throat, I shake, but the Spirit drapes a warming cloak upon my shoulders.

This ancient ghost that follows you, it has the trust of the Spirit, and if the Spirit trusts then I trust.

My heart weeps for our old home, but what the Spirit gives, we must embrace. The Spirit, it claims who it needs to, when it needs to. There is no sense in sadness.

I do not know where Silk go, but I see him in dreams. He is caught in great spider web that stretch into darkness. And that spider web, it is full of bones, more bones from more people than I ever see in my life.

If you find Silk, please free him from the web. Don’t let him become bones like the rest.

I miss my friend. Silk knew the Spirit as I did. We would talk, understand it, together. Now there is no-one but me.

Wraeclast has changed. Once, I knew my place in this world, I knew my place within the Spirit. Now, doorways have opened. Doorways I can neither see, nor touch, but through which the spiritless ones pass all the same. The spiritless ones must be driven back, their doors must be closed. May the Great Spirit guide you in your battles against these ancients that mean us nothing but ill.

I have asked questions of Spirit and it has answered in dreams that wake me with screaming. Arakaali will suck all life from this land, leave only empty husks and dusty bones. There will be no Spirit, no us, no thing left to love and laugh.

Only husks and dust… and Arakaali.

Greust hunted too far from the lands of Spirit and fell prey to a spiritless one. I am sad at how he passed. An ugly death. Yet I am thankful that he suffers no more, that he has now found his way back to the Spirit. That he can rest now.

I belong to no-one but the Spirit, I have no need for the sweet words and caresses of a ghost. Weylam, he makes me laugh, and he hears the voice of the Spirit. Not in the same way I do. His Spirit speaks of the great waters beyond this land. He pays heed to the Spirit and the Spirit loves him for it. I do not.

It is better to speak to the dead than no-one at all. Weylam knows the Spirit but he will not know me.