From Path of Exile Wiki
Jump to: navigation, search
WrathAura, Spell, AoE, Lightning
Radius: 36
Mana Reserved: 50%
Can Store 1 Use(s)
Cooldown Time: 1.20 secRequires Level 24Casts an aura that adds lightning damage to the attacks of you and your allies, and makes your spells deal more lightning damage.Per 1% Quality:
2% increased Area of EffectYou and nearby allies deal (2-16) to (37-248) additional Lightning Damage with Attacks
You and nearby allies deal (15-21)% more Spell Lightning Damage
+(0-19) to radiusPlace into an item socket of the right colour to gain this skill. Right click to remove from a socket. 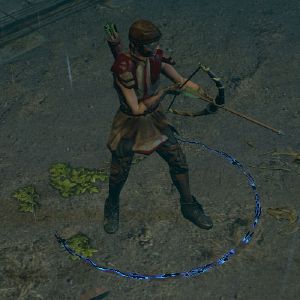 This page is about the skill. For the divination card, see The Wrath.

The effect of this skill is considered a buff, and will be affected by modifiers that affect buffs.

Multiple Wrath auras from different allies do not stack. Only damage from highest-level aura affecting a creature will be added.

For more information about auras in general, see aura.

The following unique items are related to Wrath:

The following passive skills are related to Wrath:

The following modifiers are related to Wrath: