From Path of Exile Wiki
(Redirected from Warbands)
Jump to: navigation, search
For the league, see Warbands league.

Warbands are elemental-themed unique packs of monsters. They were originally introducted during the Warbands league but were not added to the core game when the league ended. Warbands are still available through other means, such as Zana's map device, prophecies, certain Delve nodes, and certain maps such as

Iceberg MapIceberg MapMap Level: 82
Map Tier: 15
Guild Character: HIcy fangs seek tender hulls to sink themselves into.Travel to this Map by using it in a personal Map Device. Maps can only be used once.

Lighthouse MapLighthouse MapMap Level: 74
Map Tier: 7
Guild Character: FFire ignites the sky.
A signal to keep away.
An invitation to invade.Travel to this Map by using it in a personal Map Device. Maps can only be used once.

Shipyard MapShipyard MapMap Level: 76
Map Tier: 9
Guild Character: vThe stone and lumber sleeps. The captains are long dead. Only the sea knows their end.Travel to this Map by using it in a personal Map Device. Maps can only be used once.

Acid Caverns MapAcid Caverns MapMap Level: 82
Map Tier: 15
Guild Character: ÿClear water springs forth.
A moment of purity before it too gathers filth.Travel to this Map by using it in a personal Map Device. Maps can only be used once.

This section addresses how Warbands functioned in the original Warbands league. This is not applicable on the current leagues. 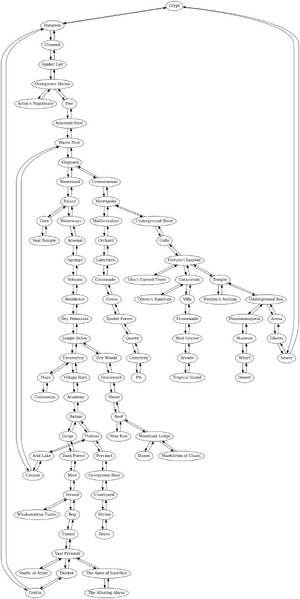 Warbands are separated into four tiers. The tier of a zone determines what kind of monsters can spawn. Tier 4 allows for the toughest warbands (the bosses) while tier 1 only spawns the weakest.

The current tier of the zone could be found with two methods:

In addition to those restrictions, zone level will also affect the number of potential warbands can spawn from each tier. At lower levels you'll only see 2 warbands, where as on 68+ zones up to 6 warbands can spawn in total.[1] Chaos Renegades, the fourth Warband faction, are hostile to both other Warbands and to exiles. They can only spawn in tier 4 map areas.

The tier will be determined by the number of warband kills in a zone; every 10 minutes (60 minutes for maps) the zones with the most warband kills will have their warbands removed, while new warbands will appear elsewhere in world increasing the strength of warbands in adjecent zones. Warbands will follow the regular world layout, for maps they follow a layout similar to the map upgrade path (see the graph).[2]

Warbands are separated into four factions, each based on a damage type.

In the Warbands league, an enemy's faction could generally be found using the following techniques:

Depending on the tier, the message on the upper right corner would change:

These item affixes only appear on magic items of the correct item type that drop from the respective Warband members. The item drops pre-identified. All Warband mods are prefixes.