From Path of Exile Wiki
Jump to: navigation, search
VulnerabilitySpell, AoE, Duration, Curse, Physical, Hex
Radius: 22
Mana Cost: (16-33)
Cast Time: 0.50 secRequires Level 24Curse all targets in an area, causing them to take increased physical damage. Attacks against the cursed enemies have a chance to inflict bleeding, and ailments inflicted on them will deal damage faster.Per 1% Quality:1Superior2Anomalous3DivergentAttacks Hits against Cursed Enemies have 0.5% chance to inflict Bleeding0.5% increased Effect of CurseAttack Hits have 0.5% chance to Maim Cursed Enemies for 4 secondsBase duration is (9-10.9) seconds
Cursed enemies take (30-39)% increased Physical Damage
Attacks Hits against Cursed Enemies have 20% chance to inflict Bleeding
Ailments inflicted on Cursed Enemies deals Damage 20% Faster
Curse gains 10 Doom per second if you Cast this Spell yourself
+(0-10) to radiusPlace into an item socket of the right colour to gain this skill. Right click to remove from a socket. 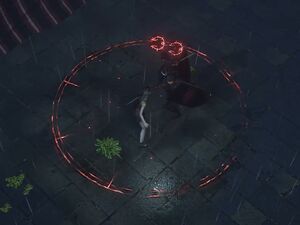 Vulnerability is a hex spell that curses all targets in an area, making them take increased physical damage and granting hits dealt on the cursed targets a chance to apply bleed. Ailments applied to cursed targets will deal its damage faster.

The following passive skills are related to Vulnerability:

Vulnerability is one of the curses that can be rolled on maps and vaal side area (known as "secret_area" in spawn weight table), the curses affect the entire area and cannot be removed. The level of the curses is fixed (level 1) but the Doom varies depending on the map tier.