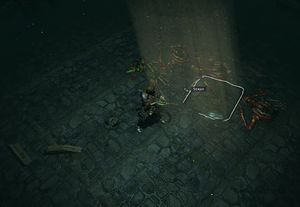 The first bust is found within a stash in the Slums Sewers.

Talk to Hargan in Sarn Encampment to start the Quest after completing Lost in Love.

Hargan: The poet, Victario, led himself a piece of the Purity Rebellion, right under Emperor Chitus's nose. But here's what really interests me. Victario was quite the talented larcenist as well. Pulled off the heist of the century, in the name of the people, of course.

Victario and his cobblers holed up in the Sewers beneath the Marketplace, the Warehouse District, and the Slums. Now that you've got Clarissa's key... well, who knows what the Purity Rebels stashed away for a rainy day. You take first pick. I'll be content with those heroic busts... part of my 'return to Oriath' fund, you see. If I was Victario, I'd have stashed one in each of my hideouts. Eggs and baskets, you know the saying.

Find the three platinum busts scattered throughout the Slums Sewers, the Warehouse Sewers, and the Market Sewers.

Enter the Slums Sewers from the The Slums and locate the Stash to collect the Bust of Hector Titucius.

Find the two remaining platinum busts in the Warehouse Sewers and Market Sewers.

Hargan: That’s a pretty statuette indeed… If you don’t mind, I might pop in there, now that you’ve done a bit of pest control. A nosey around for anything worth salvaging.

Find the final platinum bust in the Market Sewers.

The Market Sewers and Warehouse Sewers are not connected so you'll need to return to the surface and access the Market Sewers from the Marketplace. Once there, find the Stash and retrieve the Bust of Marceus Lioneye.
(Optional) Talk to Hargan if you wish to deliver the second bust and free up space in your inventory.

Hargan: Two out of three busts, well it's just not three, is it? Three's a tidy number. Victario's third and final refuge awaits you, my bold business partner.

Deliver the platinum bust to Hargan

Deliver the last platinum bust to Hargan in Town.

Return to Sarn Encampment and talk to Hargan.

Hargan: The people's poet could hide his spoils from Chitus, but not from us, eh? I knew you was the exile for the job. I'm sure you've been more than compensated already from Victario's stockpiles, but here's a little extra, care of something I found under a dead man's bed. Why? Just because I like you.

Quest Complete - You have delivered all three platinum busts to Hargan and been rewarded with a Skill Book. Use it to gain a Passive Skill point and two Passive Respec Points.