Vaal Oversoul is the final boss of Act 2, located on the top floor of the Ancient Pyramid.

, or the complete amulet from the quest Deal with the Bandits in the Dark Altar in order to summon it.

Defeating it opens the way to Act 3's City of Sarn. 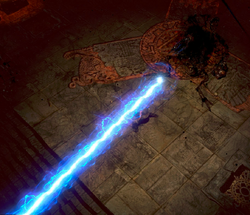 The best counter to its powerful attacks is good mobility. Always pay attention to its movements and see which arm it is using. A good way to avoid sudden spike damage (beam & slam) is to back off and start moving before the cycle of its current ability has finished. This way you are in a safe position to counter its next choice of ability.

The longer, thinner fork arm shoots lightning beams and ice shards. Dodging the lightning beams is important, as it causes Shock on hit, causing you to take 50% increased damage. Having maximum Lightning Resistance at this point is a good safety net, even though the shots are very easy to dodge with simple circling maneuvers. You should try to stay away from the ground ice as it slows down both your movespeed and attack/cast speed, weakening your position considerably.

The bigger ball arm is used for the quake and slam abilities. The slam is slow and relatively easy to dodge. Having very high Armour and fire resistance can help you survive a hit. However, trying to tank it is generally a bad idea as the damage may be unsurvivable for weaker builds. The falling rocks are relatively hard to dodge if they happen to fall near you due to the short time frame you're given to react. A small, non-damaging rock will indicate the location where a bigger rock will fall shortly after.[1] The rocks are more likely to fall further away from Vaal Oversoul, but there's no place guaranteed to be safe.[1]

The third arm is used to summon monsters. The ranged monsters it summons deal high physical damage and chaos damage. The melee monsters are slow and can inflict elemental status effects on hit. A good time to take care of them quickly is when the boss hasn't yet reappeared. While taking care of the monsters, it's a good idea to be ready for when the boss reappears as it can sometimes almost immediately start its next choice of ability. The summoning cycle can be repeated immediately if enough of the summoned monsters have died before the end of the cycle.

Causing the boss to get stunned, while extremely hard to execute considering its life pool, can interrupt its current ability and initiate the next one. The boss can generally repeat most of the abilities multiple times back to back.

When fighting the boss as melee, it is a good idea to play it very safe, as you are extremely vulnerable to its slam attack. The safest time to attack is when Vaal is summoning monsters, as that phase lasts a decent amount of time. It is also possible to attack when Vaal is shooting ice shards, but the duration of this attack is generally shorter. Try not to approach the boss when it teleports near a wall or corner. Not only is your view of the battlefield obstructed, but you also have fewer avenues of escape.

When attempting to tank the slam attack (again, extremely inadvisable), your life pool will matter much less than your fire and physical resistance stats. Using as many Endurance Charges as possible + high armor will propel you to very high physical reduction; having 75% fire resistance will remove 30%-40% of the total damage. This will generally prove ineffective, however, given that the sheer amount of physical damage dealt will still probably kill you due to armor effectiveness scaling.

As ranged, it is important to instantly start moving when he changes his weapon, because if he chooses the Lightning Beam, this can be a deadly strike and it is cast almost instantly after choosing this weapon. Also when he disappears, you should start to move around after a short period of time before he reappears, because it is possible that he chooses the lightning beam instantly which will be fired very quickly after, barely leaving reaction time.

There are two achievements related to the Vaal Oversoul: