Vaal Lightning StrikeVaal, Attack, Melee, Strike, Duration, Lightning, Projectile
Souls Per Use: 20 (N) /
Can Store 1 Use(s)
Cast Time: 1.00 sec
Effectiveness of Added Damage: (80%-98%)Requires Level 12Infuses your melee weapon with electrical energies as you swing. In addition to converting some of your physical damage to lightning damage, the stored energy becomes an orb attached to the enemy you hit, or the ground if you don't hit an enemy. The orb will periodically fire projectiles at other nearby enemies for a duration, which will also damage the enemy the orb is attached to.Per 1% Quality:1Superior1% increased Damage
1% increased Projectile SpeedDeals (80-98.2)% of Base Attack Damage
50% of Physical Damage Converted to Lightning Damage
Base duration is 8 seconds
Fires (4-8) additional Projectiles
(1-9) to (13-179) Added Lightning Damage
Can't be Evaded
Modifiers to Skill Effect Duration also apply to this Skill's Soul Gain Prevention
CorruptedPlace into an item socket of the right colour to gain this skill. Right click to remove from a socket. 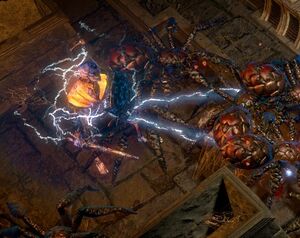 Vaal Lightning Strike (often referred to as VLS) is a vaal melee attack with the secondary effect of launching projectiles periodically from the target struck or from the ground if no enemy is hit. These projectiles deal lightning damage based on the player's weapon damage.