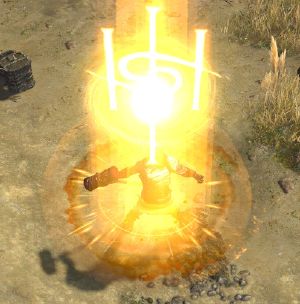 Vaal Immortal Call is a vaal spell that for a brief duration renders the player unable to drop below 1 life. This skill gem no longer obtainable in the game, and can only be obtained by trading for existing ones in the permanent leagues.

Upon usage, for a short duration the player's health cannot drop below 1, thus the player is unable to die.