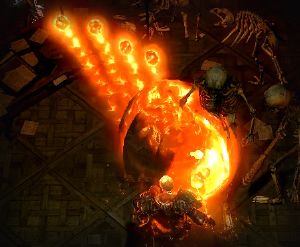 For the non-Vaal counterpart, see Fireball.

Vaal Fireball is a Vaal spell that launches fireballs in all directions around the character. The fireballs will launch rapidly one at a time rotating clockwise around the player, continuing until all 32 fireballs have been launched.