From Path of Exile Wiki
Jump to: navigation, search
"Trial" redirects here. For the boss room of the lab, see Aspirant's Trial.

The ancient Azmerians constructed complex Trials, to test aspiring leaders; body, mind and soul. To select candidates for his Labyrinth, Emperor Izaro revived this tradition with his own sinister designs.

The Trials of Ascendancy (also referred to as labyrinth trials or simply lab trials) are static puzzles distributed throughout the game's acts and maps, that test the player's mechanical ability to control their character movement. They were introduced to the game in the Ascendancy league and need to be completed to unlock or progress an ascendancy class - in this respect they are a league mechanic. Completing the trials of ascendancy unlocks the various tiers of the The Lord's Labyrinth. They do not have to be completed in any particular order, however each labyrinth must be completed in increasing order of difficulty before being allowed to progress to the next.

Each trial exhibits only one class of trap acting as a form of tutorial for the Labyrinth. Only when all trials are completed will the player be able to enter the Labyrinth of the associated difficulty. The trials also contain many doors and switches (levers) , and later trials also contain timed levers which will automatically toggle off unless a later un-timed lever is operated. In some cases, levers are placed to deliberately mislead the player. The eternal labyrinth trials are much longer than the earlier trials and feature stages of increasing complexity.

Progression through trials is shared between all of a player's characters on a per-league basis and are always found in the specified zones, but are randomly placed within.

Each of the trials associated with normal, cruel, and merciless difficulties (deprecated); begin at a door labelled "Trial of Ascendancy" and end at a plaque labelled "Trial of Ascendancy Plaque" that when clicked, spawn a return portal to the door at the entrance. A bronze monograph is present at the entrance to each of these early trials and show on the minimap as whereas the later maps are shown on the minimap as a .

when clicked, regardless of whether the specific trial has been completed previously. 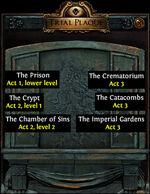 Trial Plaque for the Normal Labyrinth (click to enlarge) 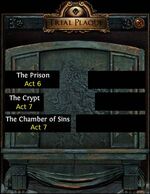 Trial Plaque for the Cruel Labyrinth (click to enlarge) 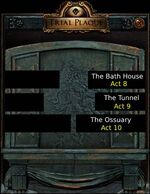 Trial Plaque for the Merciless Labyrinth (click to enlarge) 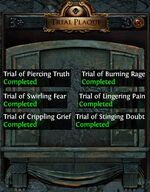 Trial Plaque for the Eternal Labyrinth (click to enlarge)

The Dream TrialThe Dream TrialThe depths of a dream hide a gauntlet that sharpens the body and mind.You will discover a Trial of Ascendancy in a map.Right-click to add this prophecy to your character.Seal Cost:
2x

prophecy increases the odds a map will select the ascendancy league mechanic when its tile-set is generated. The quest tracker will indicate that the league mechanic was chosen by displaying the prophecy when the player is inside the map.

The "global 820" channel users often share portals into their maps when they contain trials, either completed or uncompleted (i.e., with or without an