From Path of Exile Wiki
Jump to: navigation, search
Toxic RainAttack, AoE, Chaos, Duration, Projectile, Bow
Mana Cost: (7-11)
Cast Time: 1.00 sec
Effectiveness of Added Damage: (50%-73%)Requires Level 12Fire arrows into the air that rain down around the targeted area, dealing damage to enemies they hit and creating spore pods where they land. Each spore pod deals chaos damage over time to nearby enemies and slows their movement speed. The pods last for a duration before bursting, dealing area damage.Per 1% Quality:
0.5% increased Area of EffectDeals (50-72.8)% of Base Attack Damage
Base duration is 1 seconds
Deals (7.9-285.1) Base Chaos Damage per second
Fires 4 additional Arrows
50% of Physical Damage Converted to Chaos Damage
Each Spore Pod applies 10% less Movement Speed to nearby Enemies, to a maximum of 60%
Modifiers to Projectile Damage apply to this Skill's Damage Over Time effectPlace into an item socket of the right colour to gain this skill. Right click to remove from a socket. 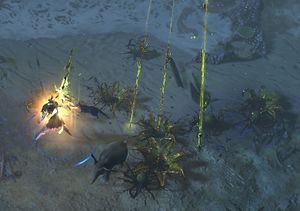 Toxic Rain is an attack skill where the user fires multiple arrows in the air, which land and drop spores, dealing chaos damage. The spore pods explode after a delay, releasing toxic ground that deals chaos damage over time and slows enemy movement speed.

The explosion of the Spore Pods counts as a hit, which allows for rapid application of "on hit" effects such as Poison, or Life and Mana Gain on Hit.

Sources of Increased Area of Effect allow the Damage over Time from each spore to overlap.[4] User testing indicates that increased area does not appear to increase the spore-to-spore distance,[5][2] therefore this should improve single-target damage.

Spore explosions and arrows count as "kill with this weapon" but damage-over-time component does not.