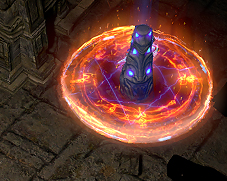 Totems are a type of creature. Totems appear in the game as monsters, and also as allies created by certain skills. Like any other creature, totems have life, and they will be destroyed if their life drops to zero. Totems do not leave exploitable corpses. Totems cast by players use their skills according to the player's stats, including modifiers from charges and buffs (like auras) affecting the player.

Totems appear in some areas, such as the Ancient Pyramid, and are just like any other monster, except that they usually cannot attack1 or move2. They are commonly found projecting auras that affect nearby monsters.

There are several unique totem monsters, for example Kuduku, the False God (who always appears in The Ledge), Puruna, The Challenger, the boss of

Atoll MapAtoll MapMap Level: 73
Map Tier: 6
Guild Character: ÍTravel to this Map by using it in the Templar Laboratory or a personal Map Device. Maps can only be used once.

and the totem bosses of

Olmec's SanctumOlmec's Sanctum
Bone Crypt MapMap Level: 74
Map Tier: 7
Guild Character: $
Item Quantity: (+120%-+200%)(40-50)% more Monster Life
(30-40)% increased Monster Damage
Final Boss drops higher Level ItemsThey flew, and leapt, and clambered over,
They crawled, and swam, and slithered under.
Still its ancient secrets await unclaimed
And of this hidden temple, only legends remain.Travel to this Map by using it in the Templar Laboratory or a personal Map Device. Maps can only be used once.

1 In map with Area contains many Totems modifier, some totems cast skills for example, the

Ice NovaIce NovaSpell, AoE, Cold, Nova
Radius: 30
Mana Cost: (8-23)
Cast Time: 0.70 sec
Critical Strike Chance: 6.00%
Effectiveness of Added Damage: 120%Requires Level 12A chilling circle of ice expands from the caster. If the caster targets near their Frostbolt projectiles, it will expand from a number of those projectiles instead. If this skill would repeat when cast this way, it will instead expand again from the same projectiles after a short delay.Per 1% Quality:
0.5% increased Area of EffectDeals (18-518) to (26-762) Cold Damage
Can expand from up to 2 Frostbolt Projectiles
Adds (3-79) to (4-116) Cold Damage against Chilled Enemies
20% less Area of Effect when Cast on Frostbolt
+(0-4) to radiusPlace into an item socket of the right colour to gain this skill. Right click to remove from a socket.

Lightning WarpLightning WarpSpell, AoE, Duration, Movement, Lightning, Travel
Radius: 16
Mana Cost: (9-26)
Cast Time: 0.70 sec
Critical Strike Chance: 5.00%
Effectiveness of Added Damage: 60%Requires Level 10Waits for a duration before teleporting to a targeted destination, with the duration based on the distance and your movement speed. When the teleport occurs, lightning damage is dealt to the area around both where the player was and where they teleported to. Casting again will queue up multiple teleportations to occur in sequence.Per 1% Quality:
1% increased Cast SpeedDeals (1-37) to (19-707) Lightning Damage
(30-49)% reduced Duration
Can queue up to 50 usesPlace into an item socket of the right colour to gain this skill. Right click to remove from a socket.

Certain skills allow the player to summon a totem ally. Depending on the skill, totem will then attack, cast spells, or project an aura for the player. It will continue to cast until it is destroyed or its duration expires, unless using an offensive spell (including minion summoning), in which case they will cast until there are no enemies in range (and start again if enemies enter their range). These skills have the Totem gem tag.

Totems allies are not considered to be minions, and are therefore not affected by minion-specific modifiers such as increased Minion Damage and Minion Instability.

Any auras projected by the totem will affect all of the player's allies, including minions and party members. Auras and aura-like effects can affect totems (this includes degeneration effects),[3] summoned totems are only affected by auras that affect defensive properties, summoned totems still use their summoner's skills. In order for an offensive aura to have an effect, it must affect the summoner, not the totem.

By default a player can have only one (1) active totem at any time. Summoning a totem with the maximum number of totems active will cause the oldest living totem to be destroyed. This is a global limit among all skills, for example if the player has a

Rejuvenation TotemRejuvenation TotemTotem, Aura, Spell, AoE
Radius: 10
Mana Cost: (9-32)
Cast Time: 0.60 secRequires Level 4Summons a totem that has an aura which regenerates life for you and your nearby allies.Per 1% Quality:
3% increased Aura Area of EffectTotem lasts 8 seconds
Regenerate (6.3-162.2) Life per secondPlace into an item socket of the right colour to gain this skill. Right click to remove from a socket.

active, and then casts

Totems can have different maximum active totem limits. If a totem is summoned at the maximum limit of totems, it will destroy the oldest totem without breaking the totem limit.

This allows for a theoretical maximum limit of 5 of any type of totems, not including local totem limit increases.

Totems have an aggro range which determines how far they can "see" for the purposes of targeting enemies with attacks and spells. Totem range is not considered an area of effect, and will not be altered by AoE modifiers. There are no longer any ways to increase Totem range.

Totems use the player's own skills as though the player had cast them. Therefore, buffs and charges (except Endurance Charges) on the player will apply to totems.[4][5] Totems themselves have a maximum Power Charge and Frenzy Charge limit of zero.[5] Any charges generated by the totem are simply discarded, and will not transfer back to the player.[6]

Note that the totem casts the player's skill, meaning that the skill is paid for with the totem's mana (or life if it is affected by Blood Magic), and any reflected damage will be reflected onto the totem, not the player.

Totems will follow the skill's cooldown and stored number of uses.

Kills made by totems are credited to the creator of the totem for the purposes of experience gain, but effects such as life gain on kill effects will not affect the player.

Any Minions created by the totem are treated as if they had been cast by the player, and are subject to the same maximum minion limits, will get the benefits of Necromantic Aegis, and so on.

While skills cast by the totem are affected by all modifiers affecting the player, the stats of the totem itself are not. The totem will not benefit from passive skills or gear that increase life or energy shield, will not be affected by Chaos Inoculation or increased resistances, the totem is not considered to be wearing the player's armour, and so forth. Totems have a standard 40% elemental resistance and 20% chaos resistance, regardless of any resistance penalties applied on the player[7].

Generic +% increased/decreased Skill Effect Duration modifiers will not affect the lifetime of totems.

When a Trap, Remote Mine, and Totem skill are all linked in combination, the result is a skill that lays a mine. When the mine is detonated, it lays a trap. When the trap is sprung, it places a totem, which then can cast the linked skill.

Therefore totems can never lay traps or mines. Totems can not be made to place other totems.

Totems do not work with trigger gems. They can not be summoned by them nor trigger any further effects.

There are passive skills that grant bonuses to totems.

These passive skills increase the damage dealt by totems cast by the player.

These passive skills increase the attack speed or cast speed of totems cast by the player.

These passive skills affect how fast the totem is summoned by the player.

Generic increased cast speed will not affect how fast a totem is summoned.

The following Cluster Jewel passives are related to Totems:

These passive skills are related to totems, but do not fit into any other category.

There are Ascendancy passive skills that affect totems.

If you manage to have 3 totems at one time, you will be rewarded the following achievement: