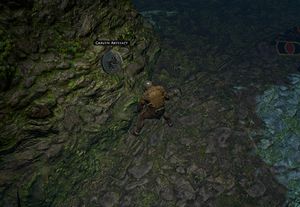 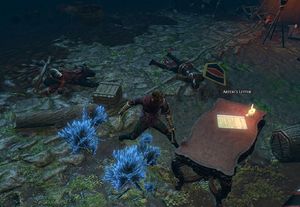 A letter from Piety addressed to Captain Arteri

This quest is given to you by Tarkleigh after entering The Ledge.

Tarkleigh asks you to find a way to the forest around the Prison for the betterment of the encampment. He suggests the Emperor's Road. This requires you to travel through the The Prison, and into the The Prisoner's Gate, where the quest will be updated upon witnessing the closing of the road.

Silk: The road? It runs east and west of here. To the west it passes the bandit woman’s camp, then turns south to the sea.

But you say it is now blocked? I have seen a strange thing in the rock by the south pass. Like one of Greust’s carvings, but of stone. You should go look at it. What has been closed might be opened again.

Once you reach the Western Forest in Act 2, you can follow the road to the blocked exit. Kill Captain Arteri for the

Use the emblem on the Thaumetic Seal, opening the way to the Prisoner's Gate. Talk to Bestel in Lioneye's Watch to receive your reward.

Bestel: Quite the lady killer, aren’t you? That singing squid didn’t stand a chance. Knew it, from the first time I saw those sharp peepers of yours.

Praites nothwithstanding, I thank you on behalf of all the fall brethren of the waves. Now that the final cadence has been played, no one need remember Merveil’s song.

Bestel: There, thought you deserved one of my finest poems, written to commemorate such a mighty feat. Oh, and this. Been keeping it for a very special occasion. Consider yourself just such an occasion.