The Unbreathing Queen IVA tangle of web trapped the body, now stolen. The Unbreathing Queen leaves behind a sorrowful soul whose howls thunder through the halls.You will encounter the spirit of a hero in the Temple of Decay or Arachnid Tomb Map and defeat it.Right-click to add this prophecy to your character.Seal Cost:
8x

Find and defeat the Unbreathing Queen's spectre in the Temple of Decay Level 1. The spectre may be on either of two floors in Level 1, but tends to be on the second floor near the back. Alternately, the spectre may be found in an Arachnid Tomb end-game map. 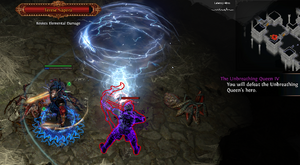