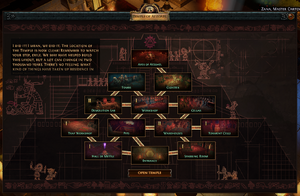 An example of a temple layout

The player's actions in the incursions have significant consequences. By killing the Vaal Architects who guide the temple's construction, players can influence what rooms appear in the present-day version. During incursions, players may find keys that can be used to unlock doors in the past, allowing access to additional rooms in the future. Players can also upgrade the rooms they are building, potentially accessing greater treasures or dangers.

After 12 incursions, Alva Valai will open a portal to the temple. The temple contains different rooms inside a single area, that match the layout of the incursions that the player originally completed in order to access it. The doors opened will also match the doors the player managed to unlock during incursions using the

Stone of PassageStone of PassageThis item can be placed into an Altar of Passage to create a connection between two adjacent rooms in the Temple of Atzoatl. This item will drop on the ground when leaving an Incursion.

Only 6 portals appear around the Map Device, as with running regular maps, meaning you don't get infinite lives and tries to complete the temple; running out of portals to rejoin the temple means you have to do 12 incursions again to get into temple. If players want to leave the temple, they may open a portal using the

PortalPortalSpell
Cast Time: 2.50 secRequires Level 10Creates a portal to the current area's town.Per 1% Quality:1Superior2Anomalous3% increased Cast Speed0.01% chance to travel to Winding Pier instead while on a Ley Fishing LinePlace into an item socket of the right colour to gain this skill. Right click to remove from a socket.

The temple is built up from different incursion rooms that each have different effects.

The endboss of the temple is the Vaal Omnitect. It is located in the top chamber, the final temple room.

This room is accessible if you create a route to it during the temporary incursions or the "present time" when you entered the temple from Alva's portal.

During temporary incursion, you can create a route by killing the mobs, until they drop a

Stone of PassageStone of PassageThis item can be placed into an Altar of Passage to create a connection between two adjacent rooms in the Temple of Atzoatl. This item will drop on the ground when leaving an Incursion.

, then going to the door you want to open with the Stone and and opening it.

During "present time", if you have access to the Explosives Room (or a higher tier version of that room) during the temple instance, you can use the

found inside it to open a path.