Oriath's bleeding heart is the main course in a terrible feast. 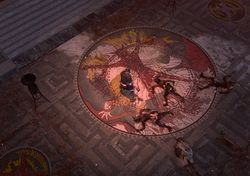 The Ruined Square is an area in Act 5. This area has a waypoint and is connected to The Torched Courts, The Reliquary, The Ossuary, and The Cathedral Rooftop.

Recent events have inflicted far greater chaos on the streets of Oriath compared to the Courts. While the landmarks and geography are similar to the unblemished Oriath Square, rubble has toppled off rooves and now lays blocking the streets. As a result the section north of the river is linear. The Torched Courts exit still spawns on the top right side of the map, and leads to the the waypoint, which spawns next to the Ossuary exit.

South of the river, the Square itself is in the grip of pandemonium. The barricade shirks have been knocked down and the barren fountain has been refilled, albeit with a far more sickly fluid than water. The Cathedral Rooftop exit spawns on the left side of the map up some steps, and the Reliquary exit spawns at the bottom of the map. However the prior southern waypoint and connection to the Control Blocks has been removed, blocked by corpses and human remains.

The hideout remains in its previous position within the street to the southeast off the square.

In Act 10, The Ruined Square is replaced by The Ravaged Square. 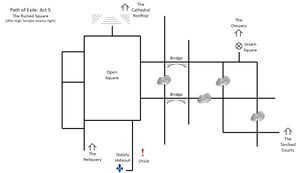 Map of the Ruined Square