The Pale CourtMap Level: 75Travel to this Map by using it in the Templar Laboratory or a personal Map Device. Maps can only be used once. 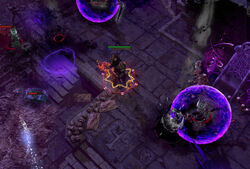 The Pale Court is an end-game area where the battle with The Pale Council takes place.

Upon taking a portal from the map device, one will enter a small preparation room with no monsters. This ready room has a stair case to the main arena, which will start the fight.

As the bosses take more damage, they will summon their pets that you faced during the earlier prophecy stages. Drop Bears, Whispering Tomes, Undying Hero, etc. These are mostly for potion charges and are comparable to magic monsters.

For overall difficulty, each boss is slightly harder than the final step in the prophecy. This makes the fight fairly easy compared to regular Atziri.

During the final round as bosses begin to die, they don't typically drop loot. Only the last boss slain will, which also determines which unique council item the player will receive.

Once all four bosses have been slain, a town portal will open in the middle of the arena, allowing the player to exit. Re-entering from the hideout will however place the player in the initial starting room.

One of the following unique items drops depending on the last boss slain. It is random and can't be controlled by the player.

In addition, the "Can have up to 3 Crafted Modifiers" crafting recipe can be found here.

The Recipe: Can have multiple crafted mods is also found here as well.