From Path of Exile Wiki
(Redirected from The Eternal Labyrinth)
Jump to: navigation, search 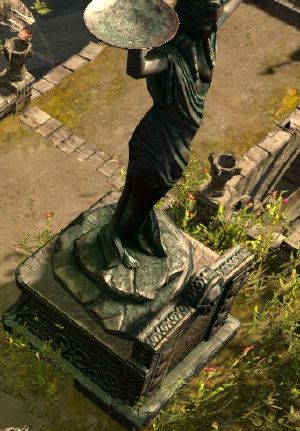 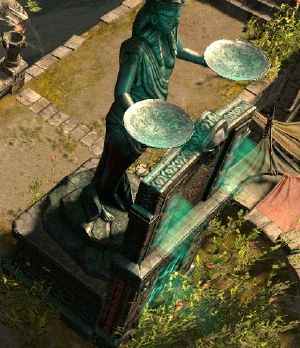 Tribute to the GoddessTribute to the GoddessYou may appeal to the Goddess for another verdict,
but justice favours only the truly worthy.Travel to the Aspirants' Plaza and spend this item to open the Eternal Labyrinth of Fortune. You must have completed the six different Trials of Ascendancy found in Maps in order to access this area.

Gift to the GoddessGift to the GoddessThe Goddess abides a kingdom beyond compare,
should you meet her challenge.Travel to the Aspirants' Plaza and spend this item to open the Eternal Labyrinth of Opportunity. You must have completed the six different Trials of Ascendancy found in Maps in order to access this area.

(Eternal Labyrinth of Opportunity) lets you use the Divine Font 6 additional times.

Cleaver traps are typically on narrow corridor paths, attached to the side. They consist of a large blade and wooden holding mechanism, and the blade slams down onto the corridor path every few seconds. They deal high amounts of physical damage on hit and apply a strong bleeding effect. Carefully time the blades and get through safely.

Dart traps are fixed on a wall or pillar, firing projectile periodically or when a hidden pressure plate is stepped on. They deal physical damage on hit and apply poison, as well as greatly slowing the player's movement speed.