The Chamber of Innocence

In this holiest of sanctums, the High Templar communes with God and delivers His divine judgement. 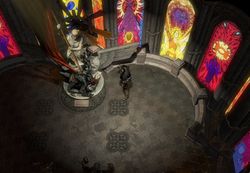 The Chamber of Innocence is an area in Act 5. This area has a waypoint and is initially connected to The Templar Courts. After the player defeats High Templar Avarius, the exit leads to The Torched Courts.

The layout is mostly linear with some small side paths. The boss arena is named The Sanctum of Innocence.

The Story of Innocence

On that day two were born of their mother’s womb.

Innocence, with eyes of burning red.

Sin, with eyes of clearest blue.

Innocence lived with an honest and pure heart, never straying from his mother’s word.

Sin filled his heart with lies and indulgence, and deafened his ears to his mother’s pleas.

When the Mother of Two broke bread, she allowed Innocence to eat his fill, as reward for his virtuous nature.

Sin was cast the scraps to remind him of his worthless ways.

Yet the punishment only served to feed Sin’s lusts.

Before his brother’s eyes, Sin stole a fish from the market and lied to the watchmen who caught him.

Sin then beat his brother until a promise of silence was extracted.

Innocence could not keep a promise made in fear.

He bore witness and testimony to the Mother of Two, and it was decided, between mother and son, that Sin was beyond rule and redemption.

That only purification could cleanse his burgeoning corruption.

The village gathered to watch Sin become ash, and breathed deeply of the smoke that poured from his screaming mouth.

Sin filled their lungs, their minds and their hearts.

Innocence watched Sin take root in the bodies of men and women and children.

He witnessed them turn on each other, first with words, then with fists.

Friends and kin embraced in mortal struggles, their skin weaving with skin, flesh bonding with flesh,

bone entwining with bone, until the village had become one writhing giant, forged of strife and hatred.

As this titan of Sin rose to its many feet, Innocence knew that the village was lost.

With an anguished cry he committed it to flame.

As town and titan burned, the sky turned dark with the ash of Sin.

There, amongst the raging ruins of his home, Innocence swore an oath.

No matter where the ashes of Sin fell, his purifying flames would rise to meet them. 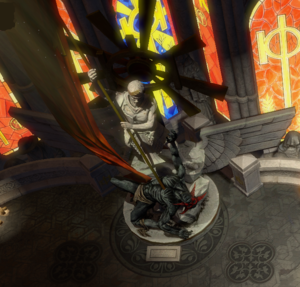 Waves crashed upon the shores of Oriath.

The Ravenous God and His starving multitude,

Rising with the tide,

Until Innocence cried out, "No more!"

Bathing our city in fire,

Scorching the wicked to ash and bone.

Into the embrace of our glorious Saviour.

Driven down he was into soil, stone and beyond,

By the Will and Light of our Innocence.