From Path of Exile Wiki
(Redirected from The Azurite Mine)
Jump to: navigation, search
For the league, see Delve league. 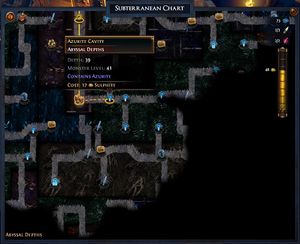 The subterranean chart of the Azurite Mine

A delve is the exploration of the infinite Azurite Mine dungeon. The character guides a Crawler (mine cart) powered by Voltaxic Sulphite through the mines to a checkpoint. Players can start delving from act 4 onwards, when they start encountering Niko, Master of the Depths.

Voltaxic Sulphite is used to travel to undiscovered checkpoints in the Azurite Mine. From act 4 onwards, zones can spawn 3 caches of Sulphite. Clicking on it will summon Niko to harvest it. The higher the zone level, the more Sulphite is gained. In maps, the amount of Sulphite received can be increased with map quantity. Nearby party members will also receive the harvested Sulphite. The Sulphite in maps can be increased with certain Scarabs.

Players can only hold up to a certain amount of Sulphite at a time. The maximum Sulphite capacity can be upgraded using Azurite.[1] The amount of Sulphite needed to navigate from one checkpoint to another depends on the depth and the length of the path, up to a maximum of 1100 Sulphite per segment.

Sulphite scaling based on area level

Those are base values and can be further modified by map quantity. In maps, effective area level is used instead of base area level.

Light and darkness play an important role, as the player character takes increasingly high damage over time when outside of any lit areas in the form of a stacking debuff. The debuff deals damage equal to 2% of the player's life and energy shield per second, gaining a stack every 0.25 seconds (maximum 5000 stacks). Stepping into a lit area clears the debuff. Allied minions and totems will not take darkness damage. Additionally, monsters within the darkness cannot be damaged.

Light is primarily emitted by the Crawler, cables that are generated in cleared paths, and Flares. Flares are consumable items that can be thrown the create a temporary lit area. Its radius, duration, and maximum capacity can be upgraded with Azurite. Stalkers, a monster found in Delves, can temporarily disable sources of light.

Generic light radius modifiers will not work in the Azurite Mine.

The Crawler is used to navigate to undiscovered checkpoints, powered by Sulphite. The Crawler will automatically navigate to the chosen waypoint, providing light around it. If players move ahead of its path, it will greatly speed up to catch up to them and stops if players move too far away from it.

The Crawler will also pick up items dropped within a large radius around it, which it drops when the checkpoint and encounter is cleared.[1]

Dynamite is used to destroy fractured walls, which are hidden in dark areas off the path. Each wall takes only one dynamite to destroy. Dynamite can also be used to deal damage to enemies.

Dynamite capacity, radius, and damage can be upgraded with Azurite.

The mine can be explored going downwards (increasing the difficulty) and laterally.

Progress is the mine is shared between all characters in a league; different leagues will have different layouts of the mine. When playing in parties, the process is tied to the owner of the mine and other party members cannot continue if the owner leaves.[1]

In each delve, players navigate from one checkpoint to another undiscovered one. At the end of the checkpoint, there will usually be an encounter of some kind. Once the encounter is cleared, the Crawler will drop all the items it picked up and any loot containers nearby can be opened. Each checkpoint drops different rewards, indicated by its icon.

Grids can contain zone modifiers, increasing in difficulty. The lower the depth, the more likely a grid will have a zone modifier.

To return to the current instance from the Mine Encampment, click the top left icon to teleport to the last checkpoint used. 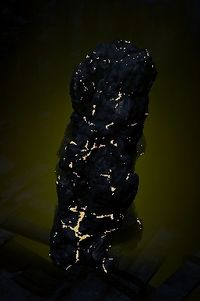 The mines contain many small containers of loot, often hidden away in the darkness. These containers do not display its item name unless players are close enough to it and have a faint sparkle around it. They are often found in side paths where the Crawler passes by.

They can contain items, fossils, resonators, flares, dynamites, or Azurite. 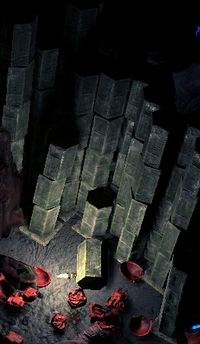 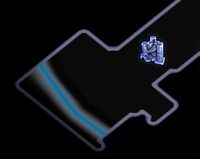 Fractured walls can be found hidden in dark areas. They will be marked on the minimap if you are close enough and and hovering over it will show the wall's health bar. These walls can be destroyed with a dynamite. Behind fractured walls are rare loot containers and sometimes, a hidden path to an inaccessible checkpoint.

There will always be at least one fractured wall in grids that do not contain checkpoints.

Some checkpoints have no paths leading into it. This means it is hidden behind a fractured wall. Once the wall is destroyed, players can send the Crawler to that checkpoint.

As a character levels up, Niko will dig a mineshaft that goes straight down from the Mine Encampment. Mineshaft length is shared among all characters in the league, and is based on the highest level character of that league. Niko will stop digging mineshafts at depth 34 (monster level 68).

The mineshaft is intended as a catch-up mechanic for players that don't progress delves during the campaign. The mineshaft is a straight downward path with nothing inside. It will override any node it spawns over.

The Azurite Mine contains six common biomes, each with different monsters, encounters, and common fossil drops. Rarely, a city biome will spawn, which contains better loot and rarely, a special boss, but are more difficult and denser.

The weight is scaled between the lower and upper entries based on current delve depth. See the table below for data mined values.

If your character is below or at depth 50, the biome will not spawn.

If your character is between 50 and 100, the biome will spawn and the weight will increase accordingly;

If your character is below depth 100, the biome will always have a weight of 100

A city biome may contain a special boss. Each boss can only spawn below a certain minimum depth.

There is additional scaling starting at depth 1600, which caps out at around depth 2586.