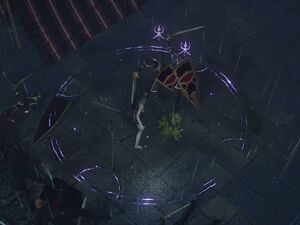 Temporal Chains is a spell that curses all targets in an area, slowing them and making all temporary effects on them expire slower.

Temporal Chains is one of the curses that can be rolled on maps and vaal side area (in spawn weight table known as "secret_area"), the curses affect the entire area and cannot be removed. The level of the curses varies depending on the map tier.

In addition, monster with the following explicit, implicit and unique mod would use this curse: