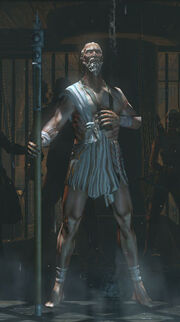 He is wizened and gray, but don't let that fool you. His humble clothing hides a powerful, sinuous physique, honed by many years of hard labor and asceticism. Age has granted the Templar an older man's wisdom and tact, qualities he combines with surprisingly well-preserved physical strength. The mighty Templar bests his foes with weapons of steel, and a shield of righteousness. His great bravery and purpose drive him headlong into the fray, disdaining risk with dogged zeal. Some might look upon the Templar's bravado as foolhardiness, but they simply do not know what it means to be a man of faith. On Wraeclast, where faith and hope are dim, he is a shining, towering beacon.

The Templar is Path of Exile's strength/intelligence hybrid class, a perfect balance of brawn and wits. He is a skillful fighter, trained in an array of weapons, from the sharpest cutlass to the heaviest two-handed mace. He's also comfortable wielding a shield, either for additional protection or as a deadly bludgeon. In combat, this pious warrior is expert at augmenting his substantial offense with a wide range of magical abilities. The Templar is also adept at taking punishment, and he's happy to be up at the front lines, serving as a martyr and champion for his ranged companions.

The armors associated with the Templar's strength and intelligence are Chainmail Coifs/Helmets, Chainmail/Ringmail, Mesh/Chain Gloves, Mesh/Chain Boots, and Kite Shields.

Templars can specialise into one of these three Ascendancy classes:

The Templar is voiced by New Zealand actor, Kevin Harty.

"I fought, wept and bled for God and the Order. I would have died for my Templar brothers, every single one. And how do they reward my piety, my devotion? They exile me to the land of the damned. To Wraeclast.

I know now that my brethren are merely God's tools. He has given me this path to walk, so I shall muster my strength and my power... and my faith. It is my shield against the darkness to come."

Achieving Level 2: "It would seem that my God has no need for my company just yet."

Achieving Level 5: "The path becomes clearer with each bloody step."

Achieving Level 10: "Your humble servant thanks you, my God."

Achieving Level 15: "Your trust is the only reward I need, my Lord of light."

Achieving Level 20: "The night must give way to the day."

Achieving Level 30: "I was born to this land, delivered to this task. I will prevail."

Using skills in town: "This is neither the time nor the place."

Not enough Strength: "I have not the brawn to use this yet."

Not enough Dexterity: "I'll need to be lighter on my feet to use this."

Not enough Intelligence: "I'm baffled by this at the moment."

Occasionally, after killing a rare mob: "Go with God."

Occasionally, after killing a rare mob: "Death to sin!"

Occasionally, after killing a rare mob: "Purity will prevail!"

On the Terraces: "My nightmares...they were prophecy."

On the Lower Prison: "In this cage, evil claws at the bars and howls for freedom."

On The Ship Graveyard: "This is a mortuary for lost children, hidden from the eyes of their Father."

Having killed the Hungry Corpse: "Even death gives no solace in this tortured land."

Having killed Merveil: "A woman corrupted from her humanity. I must cure this plague before it sickens all of God's creation."

Nessa's Introduction: "I know you, The blasphemer. That's what my father called you. God saw fit to drown my father, and everyone else I ever loved. I wonder what fate He has in store for you. I'm Nessa, and I suppose I should thank you for ridding us of Hillock, that putrid giant you felled out there. You know, back in Oriath, I was taught that God loved me. He has a funny way of showing His love, doesn't He, Templar?

Bessel's Introduction: A tyrannical Templar, to be tested and tempered in the straights of Wraeclast. That's the first line of the poem I'm writing about you, exile. Easy, mate. You could damn a bloke with a look like that. The name's Bestel, captain of the good ship 'Merry Gull'. Alas, my Merry Gull is gone. My crew is gone. But my wits remain... after a fashion."

On the Chamber of Sins: "The lair of a toy maker, with pretensions of Godhood."

Having killed Kraityn: "You're nothing, thief. Not even the life you wasted on spite and avarice."

Having killed Alira: "You are thus blessed, daughter of God. He will show you what true friendship is."

Having killed Oak: "You dare to speak for peace outlaw? There's the peace your lies have earned you."

On releasing the darkness: "I beg of you God, help me lead this world back into the light."

Having killed the Vaal Oversoul: "Back where you belong, nightmare. The faithful need not fear your kind."

On the Solaris Temple: "Something eternal remains of this empire. The question is, how?"

On the Crematorium: "Life in his right hand, and death in his left. And then there are those who fell through God's fingers."

On the Lunaris Temple: "And so, I take my first steps into damnation and condemnation."

Gravicius, to the Templar: "You are God's greatest disappointment, heretic."

Having killed Gravicius: "You chose the road, old friend. God put me at the end of it."

Having killed Piety: "Rest while you can, mistress of suffering. Judgment will not go easy on you."

Having killed Dominus: "By exiling me you were my genesis, Dominus. And now, countless miles and murders later, honored to be your revelation!"

Hargan's Introduction: A Templar... in exile? Now I've seen it all. Has Dominus run out of scum like me to banish already? Ah well, since you're here, Your Worship, you might be able to help us out. We've lost some doe-eyed lovers. Clarissa and Tolman. Last I saw, they were headed out for the slums. May God above light your way in their salvation, brother.

On the Aqueduct: "May these waters wash away my sin and baptise me anew."

"Dominus was High Templar in Oriath, was he not? Your God needs to be more careful when He chooses His servants.

Then again, perhaps He learns from His mistakes. We shall see."

"Petarus: My lord Templar, I can't tell you how good it is to meet a man so willing and able to put the Order back on the road to Faith...

Vanja: I've just seen too many foul deeds done in the name of Faith.

Petarus: Committed by those who talked of God while they acted for themselves.

Tasuni's Introduction: "Your holy mantle is stained with the blood of the countless, Templar. A sacrifice worthy of a God... just not to the god you had in mind."

"Whether it is our gods or your god who have brought you to Highgate, the consequence is the same.

You believe blindly in the divine, and a blind man is never lost in the darkness. You will kill the Beast within the mountain. Lady Dialla has told me this.

She has much faith in you, Templar. The question is... can we Maraketh share in her faith?"

On the Dried Lake: I am sorry, God. We must learn not to abuse your creations."

Having killed Voll: "You're free now, Voll. Go with God."

On the Mines Level 1: "The earth here trembles with the fear of judgment."

On the Mines Level 2: "Corruption eats away at the roots of this mountain."

After freeing Deshret: "No soul should suffer as you have, Deshret."

On the Crystal Veins: "This land is teetering on the brink of Cataclysm."

Having killed Daresso: "We give our fallen heroes more glory than they ever earned in life."

On Kaom's Dream: "The air here burns with wrath."

Having killed Kaom: "Your Way led to damnation, Kaom. Find another."

On the Belly of the Beast Level 1: "This is not Creation. This is perversion."

Piety, the Abomination, in the Belly of the Beast: "You see, heretic? My God takes good care of me."

Piety, the Abomination, after being defeated: "I may have misjudged that God of yours..."

Piety, after being restored:

"Twice now you've baptised me in my own blood, Templar. So believe me when I tell you that I've had all the divine revelations that I can stand.

On the Harvest: "Piety, my lord? I am sure you will reveal your purpose in time."

Having killed Doedre: "Embrace death, Doedre, for your flesh was your undoing."

Having killed Shavronne: "You were imprisoned by your own vanity, Shavronne."

Piety, about to open the Black Core:

"So tell me heretic, is yours a compassionate God? I doubt even He has room in his divine heart for such an unusually talented sinner as me.

Just so that we're clear about this. I'm not doing this for Him, anyway."

Malachai's introduction: "I actually find myself admiring you in this moment, Templar. You and I will create the most beautiful of Nightmares together. Rather the hallmark of God, isn't it? Let me show you what a real god can do!"

Piety, after being killed by Malachai: "This is what I get for trying to be a bloody saviour. I've seen, felt... been things that you can't imagine, heretic, and I don't regret a damned moment of it. So go. Finish what we have started. And when I find out if this God of yours is real or not, I'll be sure to let you know."

Replying to Piety: "No need, Piety. Just you go and see for yourself."

Having killed Malachai: "You fought against Death your whole life, Malachai, when it was the one thing that would grant you true immortality."

"What do we call you now? Saviour? Messiah?

Just remember this, Templar. Your 'Faith' didn't kill the Nightmare. You did."

Petarus and Vanja after Malachai's death:

"Petarus: I am proud to be part of the Order. Your order, my Lord.

Vanja: And I am sorry. I should have had more Faith. I've always believed in God. It's just that, until now, I didn't think the Templar did.

Petarus: I guess sometimes it takes a miracle, something to prove we're not on our own in this world.

Vanja: True. Thank you, Templar, for reminding me what it's like to believe. It's a luxury that I haven't been able to afford.

Petarus: Yet it's something that all of Wraeclast can have now."

"You're going to tell me that you didn't kill the Beast, that it was simply your God acting through you.

Please don't say it. I fear I might be ill upon your self-righteous toes. No, Templar. You did this. The oh-so-ordinary man that is you.

That's where Malachai had it wrong, you see. He considered greatness to be a birthright, the possession of but a gifted few.

You, Templar have but one gift. Belief. You believed that God chose you to free Wraeclast from its nightmare and you've done everything in your power to prove that belief to be true.

It's a lie of course, but what a beautiful and powerful deceit! Please, continue to lie to yourself, Templar. It brings out the best in you."

"'The righteous shall inherit.' Vol said that, in a candlelit sermon on the eve of cataclysm. The only smart thing that idiot ever said. The only time God actually agreed with him.

My Malachai is dead. I knew it, felt it, understood it the moment you struck the final blow. I am, I was... The Gemling Queen, and now my King is dead."