From Path of Exile Wiki
Jump to: navigation, search
Tectonic SlamFire, Attack, AoE, Melee
Mana Cost: 10
Cast Time: 1.00 sec
Attack Speed: 80% of Base
Effectiveness of Added Damage: (170%-200%)Requires Level 28Slam the ground, unleashing a fiery fissure in front of you, dealing area damage and releasing a random number of smaller fissures branching off from it. Can consume an Endurance Charge to perform a Charged Slam, covering a greater area with more branching fissures. Requires a Mace, Sceptre, Sword, Axe, Staff, or Unarmed.Per 1% Quality:
0.5% increased Area of EffectDeals (170-200)% of Base Attack Damage
Charged Slam Deals 60% more Damage
60% of Physical Damage Converted to Fire Damage
35% chance to consume an Endurance Charge to create a Charged SlamPlace into an item socket of the right colour to gain this skill. Right click to remove from a socket. 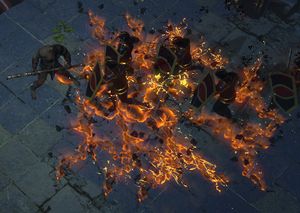 Tectonic Slam is an attack skill that slams the ground in front of the player, dealing area of effect damage in a cone. Each attack has a chance to consume an endurance charge to deal more damage and gain a larger AoE.