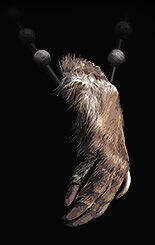 A talisman is a type of amulet. Talismans have their own implicit modifiers that are typically more powerful than those of ordinary amulets. Talismans are inherently corrupted, and therefore cannot be modified with crafting orbs.

Unlike most other amulets, Talismans don't drop as a regular world drop. Currently, Talismans can only be acquired through specific means:

These methods of acquisition were specific to certain league mechanics:

This section addresses how talismans were obtained in the Talisman league. This is not applicable to the current leagues.

A Bone Rhoa possessed by a Talisman

Talismans were encountered in the wild as a monster 'possessed' by a talisman, visually similar to possession by a Tormented Spirit. Talismans can possess any rarity of enemy and will always spawn possessing one. When the monster is killed, the talisman drops as an item – but if it is not picked up quickly by the player, it will attract another enemy and possess that enemy instead. Each type of talisman grants the monster it possesses extra combat abilities related to its implicit modifier. Monsters only pick up talismans if they're in the Talisman league or an area that normally drops talismans.[1]

WereclawWereclaw TalismanTalisman Tier: 2+(24-36)% to Global Critical Strike MultiplierCorruptedIt's said to be noble to stand one's ground.
To soak the earth in stalwart blood.
While the First Ones chose to laugh and run
and caper with untamed glee.
- The Wolven King

Monkey TwinsMonkey Twins TalismanTalisman Tier: 3(5-8)% increased Area of EffectCorruptedThe first ones marked their hunting grounds
with blood and piss.
We have tried to paint our future in words.
Now we shall paint with inks of savagery.
- The Wolven King

talismans can only spawn in the standard version of Talisman League. The

ClutchingClutching TalismanTalisman Tier: 2(15-25)% increased Global DefencesCorruptedFear the children of the First Ones.
Let fear shield your back.
And let the dullard speak of bravery
when the First Ones come for him.
- The Wolven King

LongtoothLongtooth TalismanTalisman Tier: 3(4-6)% additional Physical Damage ReductionCorruptedWe grew contemptuous of our past.
Dismissed the first ones as ignorant and wild.
We were fools and naive children
to turn our backs on our inheritance.
- The Wolven King

talismans can only spawn in the hardcore version of Talisman League.

Talismans obtained in the world follow the normal item drop rules. From normal monsters they are the same item level as the area, +1 level from magic monsters, and +2 from rares and uniques.

Talismans obtained from stone altars are an average of the talismans used,[3] where

The obtained item level can be expressed as:

The talismans has the following item levels:

The talismans in the middle of these extremes are:

The resulting ilvl from the possessed monster using equation (1) becomes:

The value will be rounded up or down to nearest integer. In this case it is rounded down to 57.