From Path of Exile Wiki
Jump to: navigation, search
SweepAttack, AoE, Physical, Melee
Radius: 26
Mana Cost: 8
Cast Time: 1.15 sec
Attack Speed: 70% of Base
Effectiveness of Added Damage: (170%-225%)Requires Level 12Swings a two handed melee weapon in a circle, knocking back monsters around the character.Per 1% Quality:
0.5% increased Area of EffectDeals (170-225)% of Base Attack Damage
(5-75) to (8-113) Added Attack Physical Damage
Knocks Enemies Back on Hit
+(0-4) to radiusPlace into an item socket of the right colour to gain this skill. Right click to remove from a socket. 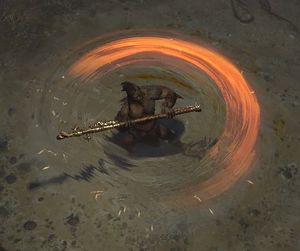 Sweep is a melee attack that deals damage to enemies in a full 360-degree circle area around the player, and knocks them back. Requires a two-handed melee weapon.