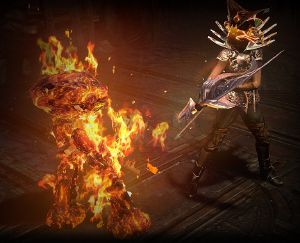 For the monster version of the Flame Golem, see Volcanic Golem.

Summon Flame Golem is a minion spell, summoning a Golem that grants the player increased Damage while active. The Flame Golem can use a fire spray, a wave of fire damage, and an explosive arcing projectile.

The list below shows microtransactions for Summon Flame Golem.