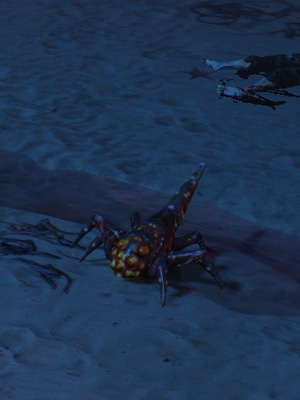 High noon on the beach is wondrous. The soaring cliffs rise just behind your back, but your gaze is fixated on the seething, pounding ocean in front of you. The roar of the waves is nearly deafening, so you turn and make your way farther up the coastline. Head down, trudging in the deep sand, you barely notice as something delicately brushes against your ear. A few moments later, it comes again, this time more insistent, even stinging a little. Startled, you whirl around, and catch only the faintest sight of movement across the broad expanse of dune. Something is out there, hiding. You resume your travel, but that is interrupted only a moment later by a sharp, hot pain against your neck, causing you to cry out and grope instinctively with your hand. It comes back covered in blood. Before you can even turn, you are dealt a powerful blow to the side of your head, sending you reeling. You fall to your knees and searing impacts strike your forehead and shoulders, ripping away skin and meat. As your vision dims, you see your attackers: strange alien creatures scuttling forth to feast on their kill. Their tiny mandibles click with hungry mirth.

The sprawling, pale sands and cliffs of Wraeclast's beaches hide a malevolent terror, the Sand Spitter. Part crustacean, part insect, these vile creatures plague the ocean side, emerging in huge multitudes from beneath the surface to ambush their prey. They possess a keen, instinctive intelligence, making them extremely elusive and hard to catch. Many who engage a Spitter have been driven mad with exhaustion, floundering through the sand in vain pursuit with their tormentors dancing just out of reach. The barrage from one of these creatures not only causes considerable injury, but a clean shot to the eyes can daze, disorient and even blind. Be wary as you walk the shoreline, because by the time they're upon you, it's probably already too late.