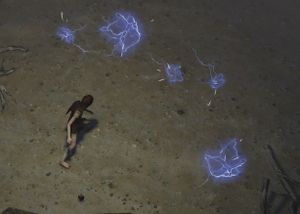 Spark is a lightning spell that launches unpredictable sparks that move randomly until they hit an enemy.


To figure out the required cast speed to get more sparks into play, divide 2 by the number of casts.


Note, you may have to decrease these cast times, as this the minimum time; the initial sparks will expire just as the new ones are leaving your position.


To calculate the new desired increase in casting speed, consider that if you increase your speed by 100%, you'll cut the time in half.