From Path of Exile Wiki
Jump to: navigation, search
Buff

You have increased Action Speed from the Slipstream. 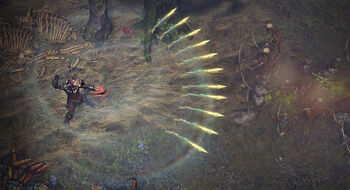 Slipstream also known for its code name: ground_haste, is a beneficial ground effect that increase the action speed of everything inside them.

It can generate from the following sources:

Slipstreams no longer spawn from the sextant. The sextant mod MapAtlasGroundHaste - 3 uses remaining, Areas contain Slipstreams (Prefix) is spawn disabled. The sextant version of Slipstream stacks, meaning the character and other monsters will receive a significant boost if they're inside all the overlapping slipstreams.[1]