From Path of Exile Wiki
Jump to: navigation, search
a Karui Ghost 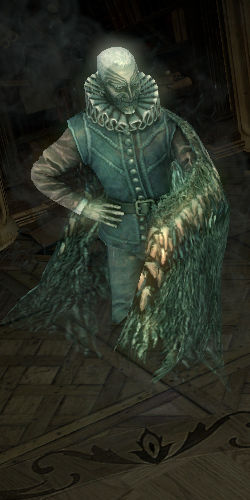 Siosa Foaga is an NPC found in The Library in act 3.

After completing A fixture of Fate he acts a vendor for all vendor reward gems for the quests you have completed, without the normal class restrictions.

Siosa's Ghost is bound to a painting of himself in the Library. He is a Karui slave that became a scholar. Icius Perandus described him as being humane to the point that he would "shame us all".[1]

Please, do not be alarmed. I am neither monster nor murderer, though that is the duality of existence that defines Sarn these days. My name is Siosa Foaga, and I have the bleak honour of being the sole scholar to the Imperius Intellection, this grand repository of knowledge you see about you. May Reason preserve us.

Is it the Karui Way to observe nature in nature. The fish without the sea is no longer a fish. It is dinner. The Eternals did not see it that way. An Eternal catches the fish, guts the fish, preserves the fish and places it in a box. Only then does the Eternal feel he truly understands the fish.

It was a Karui motiata that discarded my failing body of flesh in favour of canvas and oil. An ancient song and a momentary lapse of judgement that I've had more than enough time to regret.

In more mundane circumstances it would be preposterous to ask this of you, an utter stranger, but given that I don't know in which century I might see another pair of flesh and bone hands... There's a door, you see, concealed behind the shelves... it leads into the Archives. That's where Icius Perandus concealed his golden pages. Can you see how maddening that would be for me? No, of course you can't. Ridiculous of me to... suffice to say that they are beyond my reach. Four Vaalish texts they are, of priceless historical insight. Please, find my friend's Golden Pages and bring them to me. You will be rewarded. I vow it before the Ancestors.

My word. Vaalish contextualized syntax is a slippery eel indeed. Let me see if I can grab it by the gills...

They carried their virtue gems to... "Doryani's bed"... no, that's not quite right. Ah yes, Doryani's cradle. The historian finishes that it was a price they neeeded to pay to ensure a Vaalish future.

A cradle of virtue gems? What sort of 'Vaalish future' did Doryani hope to ensure?

Splendid. Let's see what this page has to offer us... It talks of Queen Atziri. Now here's a portentous line:

She drenches her altars with the blood of those deranged enough to question her vision.

The next piece is a real eye-crosser, but I believe it refers to a 'communion', something to do with the harvest moon? Again, Doryani seems at the heart of it.

Good, this line I can read without issue:

Oh my, this first line is frighteningly clear:

The latter text is almost indecipherable. It practically hums with agitation. Let me see... I can make out the words sleep, night mare and... "the Beast, whatever that may be. Our historian finishes with:

We have succeeded where our forbears did not. We have failed ourselves.

I need not imagine the fall of the Vaal. I saw the nightmare with my own eyes.

Strange. I was put in charge of dating the most antiquated of texts. This parchment, it's a remarkable copy, but it's no original. Much younger.

I have been enlightened beyond expectation. Your work in translating these artefacts is worthy of the highest recompense, and thus I am delighted to offer you a position in my personal laboratory. Please do not give your escorts any consternation. I would be most pained to see such a precious asset damaged in any way.

I very much look forward to working with you, Icius Perandus.

Your friend and admirer,

Poor, poor Icius. Wherever you went, my pity goes with you.

I suppose every civilization has its Doryani… its Malachai. Men of divine talent and demented ambition. Without them, history would be a far less ‘interesting’ place.

How Malachai survived the Purity Rebellion, I don’t know. He was at Empreror Voll’s side before Chitus’ corpse was even cold.

I suppose Voll found him as difficult to refuse as Icius did.

Malachai would never have risen so far without the patronage of an emperor like Chitus. It would appear that Doryani and Queen Atziri shared a similar relationship.

It was said of the beautiful Atziri that she “wished to see her likeness reflected in the still waters of history”. Chitus was no less self-impressed.

Of all the Sins, Vanity is the most hideous.

Sarn fell in the course of an hour, no more. A tempest raged down from the mountains and engulfed the city, throwing it into midday darkness.

I saw madness in my colleague’s eyes. Watched as the most rational men in the Empire jabbered and slavered and slaughtered each other.

I witnessed Trinian, our gemling Intellectus Prime, engulfed by the radiance of his flaming cranial gem and wither, like a grape in the sun, into a thing of a desiccation and famishment.

I’ve seen mountains spew fire in Ngamakanui. I’ve seen waves as tall as trees and winds that leveled warriors and walls alike. Nature is what nature is.

There was nothing natural about the cataclysm.