Difference between revisions of "Sin" 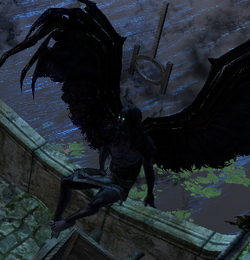 Sin is an NPC, who first appears in the Chamber of Innocence in Act 5, after High Templar Avarius has been defeated. Sin plays a major role in part two and can be found in every part two town. Sin also introduces the Pantheon to the players. Pantheon souls can be brought to him to upgrade a Pantheon power via Divine Vessel.

After Sin became a God, he created the Beast, to free humanity from the tyranny of the Gods. 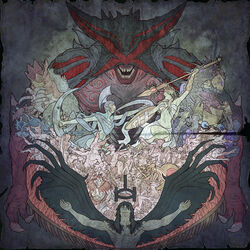 The fresco of the Pantheon.
Kitava, on the top side. And Sin on the bottom side.
See also: The Pantheon

The player kills Gods during the part two. With Sin, the character can use their power after defeating them.

Sin tells many stories about other Gods, and the history of Wraeclast.

I am Sin, the Forgotten One. Would that humanity could forget all of my kind. Perhaps with your help, that might still come to pass.

For now the blinding light has been dimmed, and darkness floods in to fill the void. The desperate and depraved set a feast for their lord incumbent, Kitava, the Ravenous One.

Should Kitava accept their invitation, there is but one thin sliver of hope for us all. My bother's Sign of Purity.

Look to it in the choking passages of Templar reverence. It shall be your torch when night falls at last.

Deep in the Templar's Ossuary, in the company of the dead, there lies the Sign of Purity.

Innocence bled himself for the creation of that cruel and desperate weapon. Tempered in his own ruby ichor, it was forged to be a transcendent tool of punishment and purification. The Sign is a living agent of righteousness, or at least, the dubious kind of righteousness that my brother subscribes to.

Innocence found, in the first High Templar, a most faithful servant and gifted the Sign to him, so that it might be used in times of great need. The great need of Innocence believers, that is. Humanity's general well-being has never been of particular concern to my brother.

The Fall of Oriath

Though I am a god, I have not forgotten my humanity. I care for that which I once was. Kitava remembers nothing and cares for nothing but his own hunger and greed. He is an endless pit of gnashing teeth and churning guts.

While other gods rise on the mainland and fight for the meagre scraps of what it was, Kitava has the most fecund and formidable civilisation of this age at his disposal. He can feed when he likes and he grows even stronger with each morsel. All of Oriath shall soon belong to Kitava, and if that happens, he will rise even beyond our reach.

He lives, after a fashion. That pretentious little vessel of his served only to encourage his divine follies. I have procured him a more.. sensible host, one that should contain his excesses and temper that fragile ego of his.

Hear this, Brother! "From mind of lead to heart of gold, your soul shall be bound, your wrath shall grow cold."

An empire is nothing more than a standard pitched in the naked earth. The time has come for you to raise this standard upon the peak o false faith, the apex of Chitus Cathedral.

Drive it deep into that sacred stone. Mark the death of a faithless empire and slay the slavering kingdom that seeks to consume it.

There is no shame in falling to a god. Shame lies only in refusing to rise again. You shall soar, that much I'm permitted to foresee. You shall ascend to the peak of your loftiest mistake and from there you shall pluck a single, surviving hope from the jaws of immortal despair.

A shil sails for Lioneye's Watch not far from here. Be on it.