SimulacrumItem Quantity: +5%5% increased Quantity of Items found in this AreaHow do you defeat that which dwells within you?Can be used in a personal Map Device. 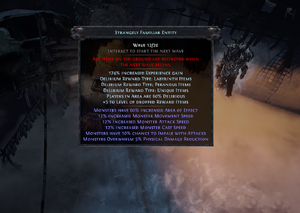 Strangely familiar entity displayed before every wave of the Simulacrum 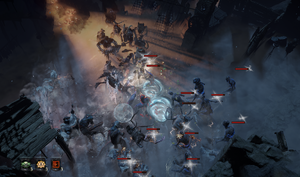 A Simulacrum taking place in Lioneye's Watch (Act 6), with monsters surrounding the player, and reward progress displayed on the bottom-left

Simulacrum is a map fragment obtained by combining 300

There are a total of 20 waves of enemies to defeat. Interacting with the Strangely Familiar Entity will summon the wave. Each wave increases the difficulty and rewards. Higher waves add additional monster modifiers and increases the level of Delirium. Once the entire wave of enemies is cleared, it will drop all the loot listed. A Stash is available in the zone, allowing you to transfer items between waves. Starting a new wave will destroy all items on the ground.