From Path of Exile Wiki
(Redirected from Shrines)
Jump to: navigation, search 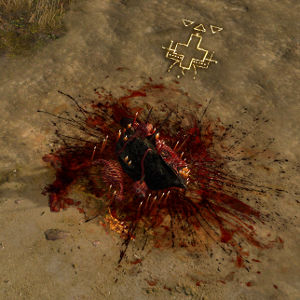 A shrine
For the map, see Shrine Map.

Shrines can appear randomly in most areas, granting significant bonuses to nearby monsters or casts spells at nearby players, and are often guarded by monsters. Players can steal the shrine to gain its bonuses for 45 seconds or until leaving the area. Players can have any number of different shrine effects at once.

There are two kinds of shrines: Buff and Spell; Buff shrines grants buffs to affected monsters, players, the player's nearby allies. Spell shrines cast spells around themselves or affected players, but do not originate from the player and thus are unaffected by their mods.

These shrines are produced by the Create Lesser Shrine skill, available from

The following shrines have been removed from the game.