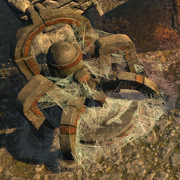 Shrine to Arakaali are environmental lore objects found in late parts of Act 7.

Found in: The Dread Thicket

As her fury grew to blot out the sun, the mother's grief grew to eclipse the land. Gruthkul and her horde stampeded across the realms of Arakaali, crushing her subjects, blood and bone, into the trembling earth. With her empire on the brink of ruination, our Queen, our Spinner of Shadows, hatched a desperate plan. Feigning injury and defeat, Arakaali lured Gruthkul into the heart of a great cavern. There she entwined her enemy in unyielding silk and then, with prodigious bravery and strength, brought the very stones tumbling down upon Gruthkul's antlered head.

Found in: The Causeway

As our Queen's body was reborn, so too was her mind. Awash with visions of future and past, she burst from the deluge, gasping with terror. She had seen her empire in ruins, her people ground into the dust. And atop her throne sat the children of Gruthkul, their long white hair fluttering in the winds of victory, their laughter as saw-blades in Arakaali's heart.

Yet as the vision poisoned her dreams, Arakaali poisoned the vision. Once, twice, thrice, the children of Gruthkul fell, crying their crimson tears. And how their mother grieved.

Found in: The Vaal City

Our great goddess, we worship her, and in so doing, we may become her. Healer of Hearts, Arakaali, with the juices of lust and venoms of the spider, she brought many back from the brink of death. Only she was worthy to rule. The Porcelain Queen, Gruthkul, disgraced my ancestors, drained them with drought, starved them with famine, blighted them with plague. It was with justice and truth that my ancestors shattered the Porcelain Queen's reign, and brought our Messiah to power.

Found in: The Temple of Decay Level 1

Our Temple of Decay was built so that we, her chosen, might sustain our great goddess in her pursuit of the secrets that lust and life would keep from us. We, her followers, brought all assortments of venomous creatures and laid them at her feet, yet it was the spider she most coveted, and as the divine energies wove their destinies about her body, our Queen, Arakaali, was reborn. Arakaali the Miracle, Arakaali the mighty Arachnophage, a beauteous creature of immortal power and unfathomable wisdom.

Found in: The Temple of Decay Level 2

Even as our courageous Arakaali forged the foundations of new empire within the ruination of the old, a fresh threat was born in the shadow of the mountains. A creature so devoid of divinity, so beyond humanity, that it drew the very essence from Arakaali as the spider imbibes the life of the trapped moth. Our Queen's medicines had once sustained us. Now famine and plague ravaged what little remained of our lands.

As the Beast of the Mountains grew, our Arakaali waned until, helpless as a child, she lost even the faith of her most devoted, the Temple of Decay. I feel the shame for my ancestors as the spider's venom burns in my belly. When our Queen needed them most, her people betrayed her, bound her in silk and left her to languish in the bowels of a pyramid, just as Arakaali had done to Gruthkul so many years before.

Now she has returned, but it is not vengeance she wants. She is no mindless Gruthkul. Arakaali, Goddess of Love, wishes only to embrace the world as she wishes she had been embraced.