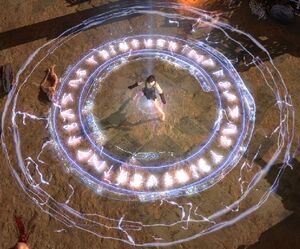 Shock Nova is a lightning area of effect spell that deals lightning damage in an area around the caster, conjuring an initial ring followed by a larger circular area. Both effects can overlap, to deal significantly more damage. Shock Nova also has a high chance to shock and provides increased effectiveness of this ailment with higher gem levels. 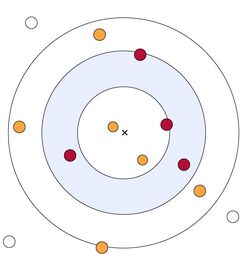 Shock Nova has two damaging components: an initial ring, and then a larger, circular area - both dealing lightning damage. The initial ring has a fixed width, and only monsters located within its area get hit by it. The subsequent area effect has a larger radius than the initial ring, and all monsters located between the spell's center up to that radius get hit. Therefore it is possible for monsters to receive damage from either both components, or just the larger area effect (see the image below for reference).