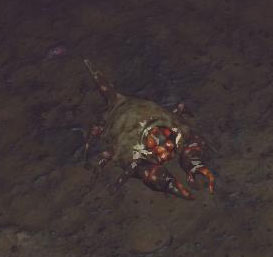 Perhaps you've traversed Wraeclast's treacherous beaches. Perhaps you've fought the terrors there, and somehow survived. And maybe you've sought refuge in one of the many caves and tunnels that line the water's edge, hoping for some respite and safety. That would be a serious mistake.

Countless years ago, the island's population of Sand Spitters began to venture away from the ocean in search of prey. They migrated high and low, with a bunch of them eventually venturing deep into the hillside. While they didn't find much to eat there in the caves, they did something pleasing to them: lots and lots of limestone. The Sand Spitters normally form their shells from the sand and rocks of the beach, but the mineral in the cave gave them something much better to work with.

Anyone foolhardy enough to explore the bowels of Wraeclast will find the descendants of those original Spitters. They have learned to combine their thick mucous with the limestone in the cave, and they use this cement to craft themselves a thick, resilient carapace. If you find yourself beset by these armored abominations, do not despair, for they have a weakness. Crack through their tough shells, and the vulnerable, stunned occupant will tumble out.

Note: The shield crab has a brief second of invulnerability once its shell is destroyed. During this brief delay, you can not attack it. This can be a bit of an annoyance as trying to attack it will just cause your character to move to its location. You can destroy it without it becoming a sniper by either gibbing it or freezing and shattering it in its shield crab form.

Note: When Shield Crabs are spawned by strongboxes, the emerging Spitter does not count as one of the Strongbox monsters and will not prevent the box from opening. In Immolation modifier races or maps, the death explosion occurs on the death of the both the Shield Crab and the Spitter