Shadow of the Vaal

From Path of Exile Wiki
Jump to: navigation, search
This page is about the main story quest. For the map boss variant, see Shadow of the Vaal (unique monster). 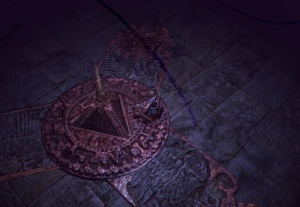 Once you touch the Ancient Seal in the Vaal Ruins, you will initiate this quest. However, until you complete Deal with the Bandits, you will not have the quest. Once you've done that, talk to Yeena in the Forest Encampment to receive this quest.

Yeena: I dreamed this. A vast creature, a thing of shadow. I saw it escape from a black prison and climb a man-crafted mountain, drifting up its four, sheer sides like the mist that reaches for the clouds. It gathered at the peak of that mountain and ate the heart from the sun.

You smell of that black must and… something else. Guilt. That is it, yes. Guilt is a strong illness. It gnaws at the spirit until there is nothing left, until you are one of the walking corpses.

You want a cure? Find the man-crafted mountain, send the shadow home, and tell the monster to take your guilt with it.

Find a way to lift the Darkness

You have unleashed a Darkness upon the land. Find a way to lift it. All the NPC's will have something to say about this.

Greust: Nothing like this happens until you are here. Bring back the light, or you will find my spear in your throat.

Silk: What has happened? Did the world not rise from its sleep? How do we wake it up? Please… what should we do?!

Eramir: You disappear into that Vaal ruin and now the sky, the light, the very land limps a leper. Somehow, whether through deliberate act or accident, you’ve caused this. Now we all suffer your consequences.

Different good, different bad… we now know upon which side the coin has fallen.

Helena: There’s one bright spot in this darkness you’ve released. At least it was you who did it. And you can undo it, I know it. Had it been Piety, we’d likely never see the sun again.

You have travelled through The Caverns and reached The Ancient Pyramid. Now you need to go to the highest floor of the Pyramid.

You have arrived at the Pyramid Apex. In the middle is the Dark Altar. Activate it by using

Eramir: So this altar you've found... It's a small pyramid, missing its apex? Must be Vaal in origin... And there's only one artifact that I've ever laid eyes upon that could be the missing apex.

Alira,Kraityn and Oak... they stayed with us for a short time, while recovering from the ordeals of the Siren Coast. Thick as thieves they were, until they discovered something: a small pyramid crafted in Vaalish style. It had the power to enhance one's innate strengths. They fought over it, sundered the apex in trine... took a peace each, and fled.

If you're determined to unlock that altar, then I think your key lies with the Lords of Larceny.

The Vaal Oversoul has spawned. Defeat it.

The Pyramid's exit is now open

After you have killed the Vaal Oversoul, you can enter The City of Sarn and begin Act 3.

Eramir: Humanity has one redeeming trait. We learn from our mistakes. You certainly gave us a scare for a bit there, but the damage doesn't seem to have been lasting.

Thank you, for doing the right thing.

Greust: You have made peace with our land. For now, my spear is lowered.

Silk: I knew this strangeness would pass. Silk does not run from such things. I stand, I guard when others shiver and shake.

Yeena: I am not surprised. I saw you, in my slumber, drive the darkness away.

I am sorry that I did not tell you before. What I see is only what might happen, and I did not want to fill you with more confidence than would have been good for you.

Helena: Thank you for returning our reality to us. I think we’ve all had a glimpse of what could happen if Piety tries to harness the power of the Vaal for her own ends.