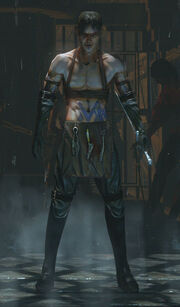 A flicker of movement, a knife from the dark. By the time you've seen him, it's already too late. The Shadow kills silently, without hesitation, without mercy. He is versed in many weapons, but prefers ambush and subterfuge. Hundreds have met their deaths shrieking in his traps. The Shadow has come from the Guild of the Night in Oriath for one purpose: to inflict pain and suffering on anyone who's wronged him. Exile is merely an inconvenience.

The Shadow is Path of Exile's dexterity/intelligence hybrid class. He prefers to use fast-hitting weapons such as daggers or claws to dart in and out of battle, while laying traps or mines and controlling the flow of combat. He makes surgical use of offensive spells while dodging attacks, always outmaneuvering his opponents.

The Shadow is one of the more difficult classes to play due to his fragility, but he more than makes up for it if handled with skill. His hit-and-run style of combat makes the most of his natural evasion and energy shield, and rewards strategic coordination of attacks, spells, and traps.

The armors associated with the Shadow's dexterity and intelligence are Masks, Jackets/Coats/Raiments/Garbs, Mitts, Boots, and Spiked Shields.

Shadows can specialise into one of these three Ascendancy classes:

The Shadow is voiced by New Zealand actor, Elliot Yule.

"A Simple job, I was told. Silence a big mouth. Get a big payout. And no one was going to be the wiser. Tidy. Except for one loose end. Me.

I would have kept my mouth shut. Professional integrity, it's called. Unfortunately not something my employers believed in.

They raised a toast to a job well done. I drank and next thing I know I'm on this stinking crate bound for exile. It's not a complete loss, I suppose. The way I hear it, there'll be plenty of work for a man of my talents in Wraeclast."

Achieving Level 2: “It’s nice not being dead yet!”

Achieving Level 3: “I’m impressed by how much this place wants me dead.”

Achieving Level 5: “With every death I live a little bit more.”

Achieving Level 15: "I'm a gardener clearing the weeds so the crops may grow."

Achieving Level 20: "No point looking back now. There's only death. And lots of it."

Achieving Level 30: "I'd question what I've become if I felt the need to. Which I don't."

Using skills in town: "I don't think I need to be doing that right now."

On trying to drop a quest item: "I should save that for later."

Not enough Intelligence: "I'm not smart enough for that ... yet."

Not enough Dexterity: "A bit too fiddly, even for me."

Not enough Strength: "I'm not strong enough for that."

Washing up on the Twilight Strand: "Nothing like a brisk dip to start the day. Now where on God's arse am I?"

Nessa's Introduction: "I saw what you did to Hillock out there, Shadow. Your murderous art is the reason you're here, in exile... and it'll be the one thing that see's you through to another dawn. I'm Nessa, and I suppose I should thank you for ridding us of the putrid giant. Back in Oriath, I feared your kind, condemned you from afar. In Wraeclast I don't have that luxury."

Bestel's Introduction: "A sodden Shadow staggered from the surf and surveyed the somber strand. That's the first line in a poem I'm writing about you, exile. Easy, lad. You could poison a bloke with a look like that. The name's Bestel, captain of the good ship 'Merry Gull'. Alas, my Merry Gull is gone. My crew is gone. But my wits remain ... after a fashion."

On the Coast: "The furnace down in the slaughter house. Yes, that's what this place smells like."

On the Lower Prison: "Theopolis' prison is a child's playhouse compared to this. They sure don't make them like they used to."

On the Ship Graveyard: "I'm usually the one making the ghosts. Someone's been busy."

Having killed Fairgraves: "I almost feel sorry for you Fairgraves. Dying twice ... can't be fun."

Having killed Merveil: "My first dance with a lady of quality. Pity she let herself go like that."

On the Southern Forest: "A forest? Death has too many damned places to hide in a forest."

On the Chamber of Sins: "I've seen some dark places in my line of work, but this is something else."

On releasing the Darkness: "This Shadow is starting to feel a little inadequate."

Having killed Alira: "Did the earth move for you, baby? Probably, you hit the ground quite hard."

Having killed Oak: "Now that's what you get for bringing a stick to a knife fight."

Having killed Kraityn: "All that fancy sword swinging when all you need is one good stab."

Having killed Vaal Oversoul: "I like darkness as much as the next assassin, but that was over doing it."

Hargan's Introduction: "'You can't catch a shadow', that's what we honest businessmen were told, considering your services. But here you are. Dominus must have some right sticky hands. Well, since you're here, you might be of some use. We've lost two doe-eyed lovers, Clarissa and Tolman. Last I saw, they were headed out for the slums. And I know it's not really in your job description, but we'd like them alive, please."

On the Crematorium: "'Treat life and death with equal grace', it's said. If I were Death, I'd take offense at this place."

On Solaris Temple: "Not a speck of dust or a brick out of place. Someone's got too much time on their hands."

On the Ebony Barracks: "I'm inside the Blackguard Stronghold... Like a fox in a henhouse.

General Gravicius to the Shadow: "You are not the only one who wields death as a weapon, boy!"

Having killed General Gravicius: "Had I killed you back in Oriath I'd have been showered in gold. Where's the justice, eh?"

On the Second level of the Lunaris Temple: "I was once off my tits for three days after taking bad Lethe-drops. Felt just like this place."

Having killed Piety: "I try not to take my work personally but you, Piety, are a satisfying exception."

On the Sceptre of God: "Whoever built this was desperately compensating for something."

Dominus to the Shadow: "I've dealt with far darker shadows than you, exile."

Having killed Dominus: "It's funny, your grace. I always thought you'd be taller."

On the Aqueduct: "All this water and not a single working boat in sight. More walking and killing for me then."

"We Maraketh are tied to our akhara, our tribe. You are a man who has cut his ties, Shadow. A man without restraint can achieve the greatest of deeds... and the worst.

Perhaps it is time to allow yourself to be lashed to something greater than simply you."

"Petarus: I used to hunt your kind back in Theopolis, Shadow. I've seen what you do to people, and why you do it.

Vanja: 'Why' stopped being a useful question the moment we set foot in Wraeclast, Petarus.

Petarus: Without the 'why', what's left?

Tasuni's Introduction: "I understand you like to be called a 'shadow'. An interesting thing about shadows: they are strongest in the day and are utterly consumed by the night.

There won't be much daylight were you are going."

"You walk to us upon the backs of the murdered. Though we are both forged upon the battlefield, we Maraketh are not like you.

She has much faith in you, Shadow. The question is... can we Maraketh share in her faith?"

Having killed Voll: "I just killed an emperor. With a feather that size, I'm going to have to get a bigger cap."

On the Mines Level 1: "Swallowed by the darkness, and I seem to be causing it a little indigestion."

On the Mines Level 2: "Someone or something is keeping very busy in the bowels of this mountain."

After freeing Deshret: "It's always conforting to witness an honest, permanent death."

On the Crystal Veins: "I do hope these constipated bowels don't find their release while I'm still inside them."

Having killed Daresso: "Oh, can you sing one for me too, Merveil? Something upbeat, please."

On the Belly of the Beast Level 1: "An amazing creature, this Beast. Almost a shame to kill it."

Piety, the Abomination, in the Belly of the Beast: "Do you assassins offer a money back guarantee, Shadow?"

Piety, the Abomination, after being defeated: "Well done, assassin. Another satisfied customer."

Piety, after being restored:

"Stay those mortal instruments of yours, Shadow. I've no wish to test my longevity, nor my sanity, a third time.

On the Harvest: "I'm working with Piety. That sounds even stranger when I say it out loud."

Having killed Maligaro: "I don't know much about Art, but I know what I like."

Having killed Shavronne: "For someone so obsessed with looks, that wasn't a pretty death."

Piety, about to open the Black Core:

"The moment I set eyes on you in Axiom that day, I knew you were something special.

Never before had I seen such a perfect balance of physiology and thaumaturgy, Death and Nightmare.

Malachai's introduction: "I've followed your performance, my anti-hero of hubris, and I've very much enjoyed it. Now you and I will create the most nightmarish of finales together. We're going to make your death really count for something."

Piety, after being killed by Malachai: "This is what I get for trying to be a bloody hero. Just before you murdered me in Lunaris, Shadow, I thought you were about to steal my destiny from me. As it turns out, you gave me back my freedom. So go on, shadow boy, and do what you do best. Murder Malachai."

Having killed Malachai: "And that's where you missed the point, Malachai. Death is the only thing that gives life any meaning."

"You have slain the Nightmare for your own reasons, Shadow.

It worries me that I don't know what those reasons are. It would worry me even more if you didn't know either."

Petarus and Vanja after Malachai's death:

Petarus: Yes... maybe I was wrong about you.

Petarus: Completely and utterly wrong, and happy for it. How's that?

Petarus: And what's next for you, Shadow? You've committed the greatest murder in the history of Wraeclast. How will you top that?

Vanja: He's a resourceful man, Petarus. He'll figure something out."

"It took a Shadow to destroy the darkness. I suppose it makes a certain kind of sense. Darkness is the absolute absence of light. A shadow is light's progeny and slave, bound to serve whether it likes it or not.

I know that's not quite what you expected to hear, but then the expected is not always what's needed. No-one expected you to kill the Beast, not truly, and yet you did it anyway.

Continue to do what is least expected, Shadow, and you will continue to earn the greatness that you so clearly craves. Just don't forget where you came from. The light."

"A Shadow returns from the darkness. A shadow that stinks of vengeance served. A shadow drenched in the End of the World. The blackest shadow.

My Malachai is dead. I knew it, felt it, understood it the moment you struck the final blow. I am, I was... The Gemling Queen, and now my King is dead."