From Path of Exile Wiki
Jump to: navigation, search
Searing BondSpell, Totem, Fire
Mana Cost: (18-51)
Cast Time: 1.00 secRequires Level 12Summons a totem that casts a beam of fire at you and each other totem you control, dealing burning damage to enemies caught in the beam. Enemies near either end of a beam also suffer burning damage.Per 1% Quality:
1% increased totem lifeTotem lasts 8 seconds
Deals (23.6-1755.6) Base Fire Damage per second
+1 to maximum number of Summoned Totems
Modifiers to Spell Damage apply to this Skill's Damage Over Time effectPlace into an item socket of the right colour to gain this skill. Right click to remove from a socket. 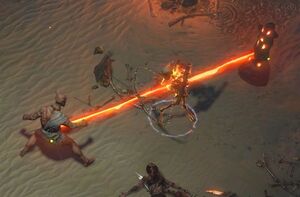 Searing Bond summons a totem that creates fiery beams between the caster and each other totem under their control. The beams deal fire damage over time to enemies touching it. Totem range is 100.

The beams will only link between adjacent totems and the caster if they are within a certain range from each other. If a pair of totems are placed too far apart, or the caster moves too far away from a totem, or the path of a beam is obstructed by something like a wall—those links will be broken.

and totem damage passives, as well as damage over time and spell damage modifiers.

Searing Bond does not hit, so "on hit" and "on crit" effects never apply. This includes

Fire Penetration SupportFire Penetration SupportFire, Support
Icon: V
Mana Multiplier: 140%Requires Level 31Supports any skill that hits enemies, making those hits penetrate enemy fire resistance.Per 1% Quality:
Supported Skills deal 0.5% increased Fire DamageSupported Skills Penetrate (18-37)% Fire ResistanceThis is a Support Gem. It does not grant a bonus to your character, but to skills in sockets connected to it. Place into an item socket connected to a socket containing the Active Skill Gem you wish to augment. Right click to remove from a socket.

which has no effect on Searing Bond damage, however it will benefit from other changes to monster resistance such as

FlammabilityFlammabilitySpell, AoE, Duration, Curse, Fire
Radius: 22
Mana Cost: (24-50)
Cast Time: 0.50 secRequires Level 24Curses all targets in an area, making them less resistant to fire damage and giving them a chance to be ignited by fire damage.Per 1% Quality:
Ignite on Cursed enemies has 0.5% increased DurationBase duration is (9-10.9) seconds
Cursed enemies have -(25-44)% to Fire Resistance
Cursed enemies have +(10-14)% chance to be Ignited by Fire Damage
+(0-10) to radiusPlace into an item socket of the right colour to gain this skill. Right click to remove from a socket.

The additional totem provided by the skill increases the maximum number of Searing Bond totems, it does not stack with similar totem limit increases of other totem types. Only the highest number of the totems of one type counts as the global maximum number of summoned totems.

For example, taking an Ancestral Bond keystone increases the maximum number of Searing Bond totems to 3, and using an

with 400 dexterity will allow you to summon 4 Siege Ballistas. Maximum number of totems in this case will be 4 (the highest of a single totem type), and only 3 of them can be Searing Totems. Attempting to summon a Searing Bond with 4 Ballistas out will desummon one Ballista.