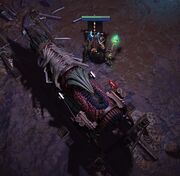 Rapture Device is a mysterious machine, located in the Crystal Veins. It requires

and Lady Dialla's life force to activate it. It can drill a hole into the Beast, allowing people to enter its bowels.

When the Purity Rebellion took down the rule of Gemlings, Malachai was the only one of the lead thaumaturges allowed to live thanks to a sweet lie. He told to everyone including Voll and Lady Dialla that he can construct a device that will kill the Beast in order to remove all thaumaturgy from the world. That was a lie, but Voll fell for it and allowed Malachai to execute his secret wicked scheme. Malachai built this Rapture Device and used it to drill a hole into the Beast so that he could enter and take a control of its power. Dialla still believes that the cataclysm was caused by Malachai's failure to kill it because of her refusal to sacrifice herself.

When Malachai entered the Beast, he quickly got rid of his opponents by summoning the Cataclysm that destroyed all civilisation. Survivors were disorganised and unable to face him. Mutated animals and walking dead are enough to keep them busy. Inside the Beast, he plans to destroy the world and reforge it anew according to his wicked visions. Somebody must activate the Device again and stop Malachai before it happens.