From Path of Exile Wiki
Jump to: navigation, search
For the challenge league, see Rampage league. 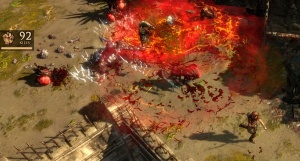 Rampage is a kill streak mechanic that provides rewards for killing increasing numbers of enemies without stopping. The rampage effect is only available for characters wearing certain unique items.

In addition to the tier effects, the character gains the following stats:

The maximum rampage count is 1000. Kills after this number is reached will not increase the rampage count any more, but will renew the countdown.

Animate GuardianAnimate GuardianSpell, Minion, Physical
Mana Cost: (11-20)
Cast Time: 0.60 secRequires Level 28Animates a melee weapon or armour, attaching it to an invisible Guardian that fights by your side. Animating multiple items attaches them to the same Guardian. You cannot animate unidentified items. Cannot be used by Traps or Mines.Per 1% Quality:
Minions have 2% increased Movement SpeedCan use Items requiring up to Level (33-100)
Minions' Attacks deal (22-56) to (34-84) additional Physical Damage
(0-76)% increased Minion Maximum Life
Minions deal (0-76)% increased Physical Damage with Melee AttacksPlace into an item socket of the right colour to gain this skill. Right click to remove from a socket.

can't gain rampage, even if it meets the requirements of the relevant part of the equipment.

There are 13 rampage tiers. The number of kills required per tier remains the same throughout the parts.

The table below lists unique items that are related to rampage: