This article is a stub. Please help improve the article by expanding it.
This page is about the lore. For the monster and the pantheon god, see Ralakesh, Master of a Million Faces. 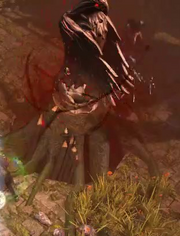 Ralakesh is a Vaal god who enslaved the citizens of Vaal city. It is unknown how Ralakesh got banished into Greust's Necklace, but it took control over Greust to the point where the protagonist was forced to defeat him to protect Wraeclast. The necklace wast put to rest afterwards.

Yes, Ralakesh, the god of many faces. I read about this god when I looked after the museum in Theopolis. It's said he was obsessed with governance, in particular, the control of humanity through our base, animal instincts. He ruled over the citizens of one unfortunate Vaal city. Alas, the name escapes me.
Yet I do recall that his experiments brought his subjects to the brink of extinction and that he was forced to enslave many a primitive Azmerian of the time so as to repopulate his domain.
Though I shudder at the thought, I can only imagine that Ralakesh has rather similar plans now.

You truly are a hero of the modern age, succeeding where even the ancient Vaal could not!
I must say, I'm really quite relieved. For a while there I feared we were headed towards another theocratic dictatorship. Exile allowed me to be free of one. I had no wish to experience another. [...]

The relic that washed ashore and started all the chaos, it was covered in ancient Vaal inscriptions. The symbols were much weathered, making them challenging to translate, yet I did my best.
The inscriptions spoke of the god, Ralakesh. If this object somehow housed the spirit of that many faced monstrosity, then I fear we are all in danger. Ralakesh was renowned for his penchant for subjugation and control. Please, I urge you to destroy this god before his strength and dominance grow insurmountable. Nip this divine threat in the bud, as it were.
Our poor friend, Greust, has likely become Ralakesh's avatar in this world. At least his recent behaviour would indicate as much. If you could see to Greust's...passing...Ralakesh will be forced to retreat into the relic. Destroy the relic and perhaps you will also destroy the god.

[...] Hmmm... Ralakesh. He's ruthless and cruel, with cunning unfathomable. Yet he bears one defining weakness. A fear he forged into chains of his own keeping. His is the terror of grasping too much and having it all slip through his fingers. It makes him irrational, and therefore vulnerable.

Ralakesh, the illustrious "Master of a Million Faces". I call him the God of Hide and Seek.
While other deities waged wars, spread their seed, and laid waste to whole empires, Ralakesh perched on his throne in a dark palace of ebony, choked with incense, blinded by obedience and deafened by a senseless cacophony of brass gongs.
Thankfully, he never had the courage to peek over the high walls he'd built, else the world might have been in trouble.

Sin on "The Master of a Million Faces"

When you try to control everything, you ultimately control nothing. Ralakesh has never quite been able to grasp that concept.

Ralakesh is battled in the storyline:

Furthermore he can be encountered in the following maps: