From Path of Exile Wiki
Jump to: navigation, search
Purity of LightningAura, Spell, AoE, Lightning
Radius: 36
Mana Reserved: 35%
Can Store 1 Use(s)
Cooldown Time: 1.20 secRequires Level 24Casts an aura that grants lightning resistance to you and your allies.Per 1% Quality:
2% increased Area of EffectYou and nearby allies gain (22-41)% additional Lightning Resistance
+(0-19) to radius
You and nearby allies gain (0-4)% additional maximum Lightning ResistancePlace into an item socket of the right colour to gain this skill. Right click to remove from a socket. 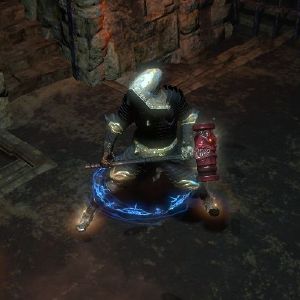 For the Vaal-themed counterpart, see Vaal Impurity of Lightning.

The following x% increase in aura effect are needed to recieve a higher amount of max resistances. +5% max resistance are gained by a lvl 23 version of the aura.

The following unique items are related to Purity of Lightning:

The following passive skills are related to Purity of Lightning:

The following modifiers are related to Purity of Lightning:

The list below shows microtransactions for Purity of Lightning.