From Path of Exile Wiki
Jump to: navigation, search
PrideSpell, AoE, Aura, Physical
Mana Reserved: 50%
Can Store 1 Use(s)
Cooldown Time: 1.20 secRequires Level 24Casts an aura that causes nearby enemies to take more physical damage.Per 1% Quality:
2% increased Area of EffectNearby Enemies take at least (15-19)% more Physical Damage,
raising up to (30-39)% as they stay in the Aura for 4 seconds
+(0-10) to radiusPlace into an item socket of the right colour to gain this skill. Right click to remove from a socket.

Pride is an aura skill which causes nearby enemies to take more physical damage. The effect of the aura increases the longer an enemy stays within the aura's radius. 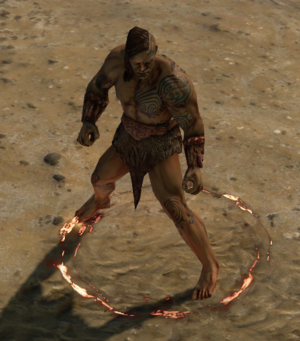 A Marauder with the default Pride aura visual effect

Because Pride only affects enemies, it can't be supported by

The following unique items are related to Pride:

The following modifiers are related to Pride: