From Path of Exile Wiki
Jump to: navigation, search
Keystone

Projectile Attack Hits deal up to 30% more Damage to targets at the start of their movement, dealing less Damage to targets as the projectile travels farther [1]
Look your foe in the eyes before you pierce him. Delight in his fear.
This page is about the keystone passive skill. For the support gem, see Point Blank Support.

Point Blank is a keystone passive skill that scales the damage of projectile attacks with respect to the distance the projectile has travelled, dealing more damage initially then much less damage after covering a long distance.

The projectile deals the greatest amount when initially released, the attack damage will continue decreasing until the maximum projectile distance according to the table below.[1][2] It is important to note that damage scaling is done with respect to the total distance the projectile has travelled, not its current distance from the point of origin.[3] If the projectile changes direction—as is the case with

Spectral ThrowSpectral ThrowAttack, Projectile
Mana Cost: (7-9)
Cast Time: 1.00 sec
Attack Speed: 110% of Base
Projectile Speed: 1000Throws a spectral copy of your melee weapon. It flies out and then returns to you, in a spinning attack that damages enemies in its path.Per 1% Quality:
0.5% increased Attack SpeedDeals (80-100)% of Base Attack DamagePlace into an item socket of the right colour to gain this skill. Right click to remove from a socket.

—distance travelled continues to increase as the projectile returns to its point of origin. Projectiles that travel in multiple segments (such as Arrow Nova Support) include the payload distance in the damage penalty.[4]

For reference, melee weapons distance range is 5 for one-handed and 6 for two-handed weapons, cold snap has an area of effect radius of 15.[2]

Point Blank SupportPoint Blank SupportProjectile, Attack, Support
Icon: b
Mana Multiplier: 120%Requires Level 18Supports projectile skills.Per 1% Quality:
Supported Skills deal 0.5% increased Projectile DamageSupported Skills' Projectile Attack Hits deal up to 30% more Damage to targets at the start of their movement, dealing less Damage to targets as the projectile travels farther
Supported Skills deal (0-38)% increased Projectile DamageThis is a Support Gem. It does not grant a bonus to your character, but to skills in sockets connected to it. Place into an item socket connected to a socket containing the Active Skill Gem you wish to augment. Right click to remove from a socket.

does not stack with the passive skill. A skill either has Point Blank or does not.[5]

The Point Blank effect only works with projectile attacks, such as those made with a bow or wand. It does apply to

Lightning StrikeLightning StrikeAttack, Projectile, Melee, Strike, Lightning
Mana Cost: 6
Cast Time: 1.00 sec
Effectiveness of Added Damage: (135%-180%)Requires Level 12Infuses your melee weapon with electrical energies as you swing. In addition to converting some of your physical damage to lightning damage, the stored energy is released from the weapon as projectiles as you strike, flying out to hit farther-away enemies. The projectiles cannot miss if the melee attack hits a target.Per 1% Quality:
1% increased Damage
1% increased Projectile SpeedDeals (135-180)% of Base Attack Damage
50% of Physical Damage Converted to Lightning Damage
Fires (4-7) additional Projectiles
Projectiles deal 25% less Damage
Damage Over Time caused by Projectiles deals 25% less Damage
(1-9) to (13-179) Added Lightning DamagePlace into an item socket of the right colour to gain this skill. Right click to remove from a socket.

A projectile which pierces, chains or forks is still considered the same projectile, and its total travel distance is used. [6]

Point blank bonuses are calculated based on the distance from where it was fired to the enemy hit.[7][8][9] 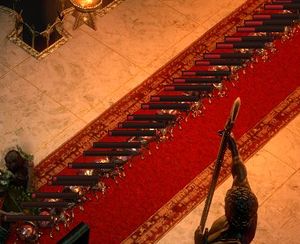 Rain of Arrows affected by Point Blank. The attack was targeting in the top right corner in this example.[9]

Projectile speed does not modify the scaling of point blank at all.

Point Blank and Far shot are multiplied together, and thus helps counteract the damage falloff at distance.

Point Blank is located in the southeast edge of the tree.