Difference between revisions of "Piety of Theopolis"

Defeating her is the objective of the quest Piety's Pets. 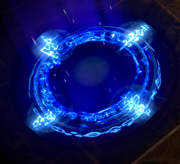 Piety changes forms when she enters the blue and red portals around the area. When enters the blue portal, she turns into a heavy melee machine, and seems to focus on mainly one target if in a party, so the others can score some ranged attacks on her. The red portal gives her powerful ranged attacks, which should be avoided as much as possible - you can kite around the poles to make this fight easier. It is believed that these phases are timed; so when she turns back to human form, that is the best time to strike some hits. During the fight she also summons a few adds, which you can easily take out to recharge your potions. As always, keeping a portal or two up is always beneficial if you run low on health and/or potions, since potions refill themselves upon visiting town.